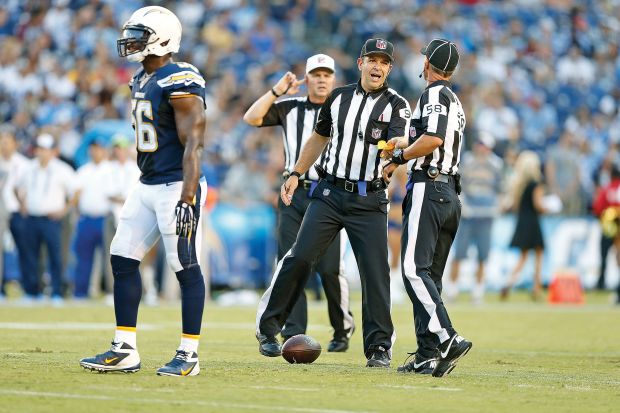 Bryan Neale, center, talks with a fellow NFL official during a pre-season game in early August between the San Diego Chargers and the Dallas Cowboys. (CNS photo/courtesy Bryan Neale)

INDIANAPOLIS (CNS) — The emotion poured out of Bryan Neale when he learned that the dream he had pursued for 25 years had finally come true.

The National Football League informed Neale earlier this year that he had been chosen as one of the 13 new referees hired for the 2014 season.

“The phone rang at 11:48 a.m. on March 21, if that tells you anything,” said Neale, a member of Immaculate Heart of Mary Parish in Indianapolis. “I’d be lying if I said I didn’t start bawling like a baby. It was a really big deal. It’s one of those deals where you go, ‘Oh my God, I’m in the NFL!'”

Yet, even Neale’s joy for his selection does not match the emotion he feels when he tells the story of how his Catholic faith became the focal point of his life.

“I grew up in a conflicted household,” he told The Criterion, newspaper of the Indianapolis Archdiocese. “Both of my parents are from Catholic families in Evansville. My dad was a hippie, and he would rebel against the Catholic Church because, in his mind, it was old school and brainwashing. So growing up, I had my dad’s influence which was to be a free spirit. And I had my extended family which went to Mass every Sunday.”

He was baptized but never had his first Communion or confirmation, he said. During Mass, his aunts, uncles and cousins would go to Communion, while “me and my Methodist aunt would be sitting in the pew together,” he recalled. “And I always felt left out. Not to be a sob story, but I felt I always wanted to be a part of it.”

Neale reached a turning point as a young adult.

“As I moved into my twenties, I hit what a lot of people do — the searching phase. I was faithful, but I really didn’t have a place to worship. The Catholic Church was always my home. I always felt fully at peace and comfortable there,” he said.

But after “talking to a friend about being lost and meandering around,” the friend told Neale he was taking Rite of Christian Initiation of Adults classes at Immaculate Heart of Mary Parish. He put Neale in touch with the director.

“I went through RCIA in 1997,” said Neale, now 44 and the father of four. “Even to this day, the consecration and Communion never get old to me. It’s the most special thing going because it’s the thing I always missed out on when I was a kid. To me, it’s the most touching, important thing that we do in the Catholic faith.”

Neale’s “all-in” approach to his faith reflects the same commitment he had to pursue his dream of becoming an NFL official.

He played football through high school, but when he enrolled at Indiana University in Bloomington he knew he was not “fast enough or good enough” to play the sport in college. So he set his sights on becoming an official. He got his license in 1988.

“My first game was a (junior varsity) game at Bloomington South (High School). I ran around the field, I had no idea of what I was doing, I never blew my whistle, I didn’t throw any flags, and I thought it was awesome. It was the greatest thing ever.”

A year later, he wrote down a list of goals, including becoming an NFL official someday. As he progressed through the college ranks — including eight years in the Big Ten Conference — his focus never wavered.

Then came the moment when he was sure he had blown any chance of living his dream — during the national college championship game in January 2011, Oregon vs. Auburn.

“Oregon was driving to win the game at the end of the fourth quarter. … I ran into a defensive back who was guarding a receiver on a fourth-down play. I hit this Auburn kid, and it left the Oregon kid wide open. He caught a pass for 16 yards, and they went down and scored a touchdown.”

“For a moment, I thought my career was over. But you still have the rest of the game. There were a couple minutes left. Auburn ended up coming back and kicking a field goal to win,” he said.

Faith helps in those moments, too.

“I pray a lot more on the football field than I do in church,” Neale said, adding, “I pray all the time. It may not be in the traditional on-the-knees, eyes-closed, hands-folded manner, but I’m constantly talking. More than anything, I affirm that God is going to take care of me.”

Neale’s faith guides him in family life as well. He’s been married to his wife, Jennifer, for 14 years. Their four children range in age from 7 to 12.

It’s important to him to give his children “a more structured faith environment,” than he had, “so it’s very central to what we do,” he said.

“It makes me feel good to start them off that way, to expose them to faith, to let them experience the things that I didn’t experience that I wish I would have as a kid,” Neale said. “And still to give them, hopefully, the freedom when they’re adults to make their own reasonable choices about their faith.

“I still want them to have part of what my dad taught me — to be open-minded and be called to what you’re called to. I hope to God, they all stay close.”

PREVIOUS: Firm foundation of faith led Colts’ linebacker from Kenya to the NFL

NEXT: Catholic League is ready for some football