Devil is real and must be fought with armor of truth, pope says 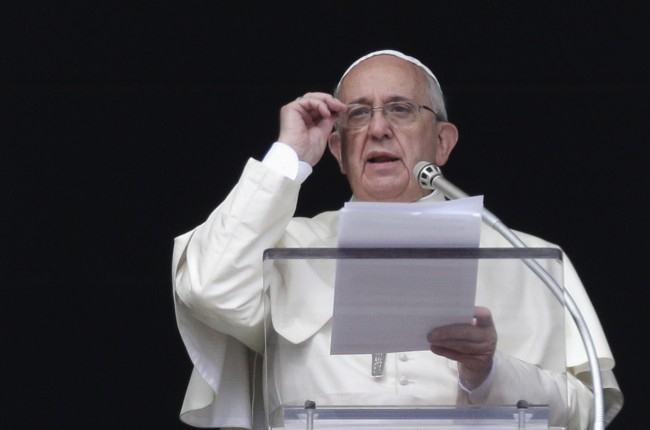 Pope Francis speaks as he leads the Angelus prayer from the window of the Apostolic Palace in St. Peter's Square at the Vatican Oct. 26. (CNS photo/Max Rossi, Reuters)

VATICAN CITY (CNS) — Christian life is a constant battle against the devil, who is not the stuff of legend, but really exists, Pope Francis said in a morning homily.

Battling the devil will not be easy because the evil one’s traps and temptations are many, and “the devil is not tossing flowers at us,” but “flaming arrows” aimed to kill, the pope said Oct. 30 during his morning Mass in the Domus Sanctae Marthae where he lives.

There are three “enemies of Christian life,” Pope Francis said: “The devil, the world and the flesh,” in other words, the carnal passions that are “the wounds of original sin.”

“But this generation, and many others, made people think that the devil was a myth, a character, an idea, the concept of evil,” the pope said, according to Vatican Radio.

“The devil exists and we have to fight against him. Paul says so — I’m not the one saying it. The word of God says it,” the pope said, referring to the day’s reading from St. Paul’s Letter to the Ephesians (6:10-20), which calls on believers to “stand firm against the tactics of the devil.”

Even believers “are not too convinced” the devil exists, he said, or else “we are a bit lazy in the fight and we let ourselves be led by our passions, by some temptations. It’s because we are sinners — all of us.”

“However, do not be discouraged. (Have) courage and strength because the Lord is with us” and supplies all that is needed in battle, the pope said.

Because the devil is “the father of lies, the father of deception,” Christians must arm themselves with the “armor of God — the truth.”

St. Paul says Christians must be “girded in truth, clothed with righteousness as a breastplate, and your feet shod in readiness for the Gospel of peace,” the pope noted.

People need to “hold faith as a shield” and take up “the helmet of salvation and the sword of the Spirit, which is the word of God,” he added, and they must pray all the time.

“You cannot be Christians without working continuously at being righteous. You can’t,” the pope said.

People need faith to go forward and they need to know “that it is God defending us, to resist the devil’s temptations,” he said.

“Is that clear? You cannot think of a spiritual life, a Christian life,” he said, “without resisting temptation, without fighting against the devil, without putting on this amour of God, who gives us strength and defends us.”

“Christian life is a battle, a very beautiful battle because when the Lord wins at every step of our life, he gives us a joy, a great happiness, that joy that the Lord has won in us” with his free gift of salvation, the pope said.

NEXT: Pope: Don’t be afraid of critics; seek out, share Gospel with sinners