Pope: Don’t be afraid of critics; seek out, share Gospel with sinners 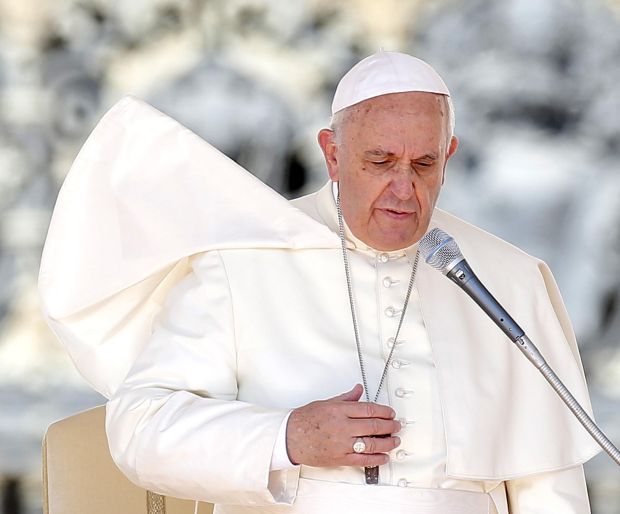 Pope Francis' cassock is blown upward by the wind as he addresses the general audience in St. Peter's Square at the Vatican Sept. 3. (CNS photo/Fabio Frustaci, EPA)

VATICAN CITY (CNS) — God isn’t afraid of getting his hands dirty, being inconvenienced or even scorned because he will do whatever it takes to save everyone from sin, Pope Francis said in a morning homily.

“A true priest, a true Christian, have this zeal inside that no one should be lost. And for this reason they aren’t afraid of getting their hands dirty. They’re not afraid,” he said Nov. 6 during his morning Mass in the Domus Sanctae Marthae where he lives.

“They go where they must, they risk their life, risk their reputation, risk losing their comforts, their social status, even losing their ecclesiastical career, too. But they are a good pastor, and Christians must be this way, too,” he said, according to Vatican Radio.

The pope’s homily focused on the day’s Gospel reading from St. Luke (15:1-10), in which Jesus explains to the scandalized Pharisees and scribes why he welcomes and eats with sinners.

“It was a real scandal back then” for anyone to associate with such sinners, the pope said. “Imagine if there had been newspapers back then!” he said, implying there would have been many shocking headlines.

But with his parables of the lost sheep and the lost coin, Jesus explains why he came: “To go and search for those who were distanced from the Lord,” Pope Francis said.

“God is not a businessman,” who is making sure any effort brings in high returns; “God is a father and he goes all out, all the way to save” even just one person, the pope said, “This is God’s love.”

“He doesn’t stop halfway on the path of salvation, as if to say, ‘I did everything. It’s their problem.’ He always goes, he heads out, he comes down.”

The scribes and Pharisees, on the other hand, “go halfway. They care about having the balance sheet of profits and losses be more or less in their favor,” so the thought of losing a few sheep doesn’t bother them in the least as long as they can say “I earned a lot” in the end.

The pope said, “It’s sad” when priests and Christians today only go “halfway” in sharing God’s love and salvation.

“It’s sad, the priest who opens the door of the church and stays put, waiting. It’s sad, the Christian who doesn’t feel deep down, in his heart, the need, the necessity to go and tell others the Lord is good,” the pope said.

“How much perversion there is in the heart of those who believe themselves righteous, like these scribes, the Pharisees. Oh, they don’t want to get their hands dirty with sinners,” he said.

“A priest must have God’s heart and go all the way” because he wants no one to be lost, the pope said. Lay Christians must do the same.

“It’s so easy to condemn others,” the pope said, “but it is not Christian, you know? It is not what children of God do. The children of God go all out, give their lives for others, like Jesus did. They cannot be at ease, taking care of themselves and their comfort, their reputation,” he said.

Good priests and laypeople “go out, always heading out, going out of themselves, heading towards God, in prayer, in adoration, heading out toward others to bring them the message of salvation.”

This attitude means that good priests and laypeople also know what tenderness and joy are, the pope said. They know the tenderness of “putting the lost sheep over their shoulders and bringing it back to the others” and the joy “that comes from God, that joy that comes from the heart of the father who goes to save!”

“Do not be afraid of people being critical of you for going to look for brothers and sisters who are distanced from the Lord,” he said. “Let’s ask for this grace for each one of us and for our mother, the holy church.”

PREVIOUS: Devil is real and must be fought with armor of truth, pope says

NEXT: Reader wonders: Is it time to find a new parish?