Church is growing in the far-off mission land of Mongolia 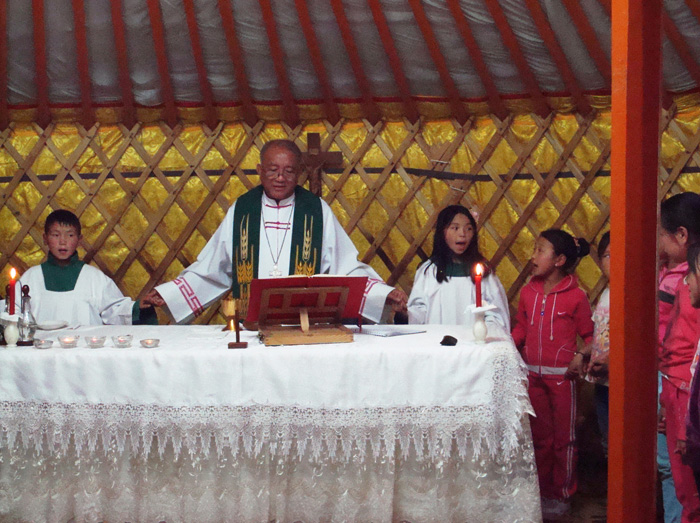 This year’s World Mission Sunday Appeal Oct. 18-19 used the theme, “I Will Build My Church” and showcased the Republic of Mongolia as the world’s youngest Catholic Church.

Just 22 years ago, with a then-population of almost 2 million, it had zero native Catholics. Mongolia, a large but sparsely populated land South of Siberia and North of China, was at one point in its history during the reigns of Genghis Khan and Kublai Kahn among world’s largest empires, but that was long ago.

More recently it was a vassal state of the atheistic Soviet Union, and all religions were ruthlessly exterminated.

With independence from Soviet control the new government declared freedom of religion for all and established diplomatic relations with the Holy See. When Missionhurst Fathers Wenceslao Padilla, Gilbert Sales and Robert Goessens arrived in the capital Ulaanbaatar in 1992 the only Catholics they encountered were a handful of foreigners.

The three priests, already experienced missionaries in the Far East, persevered in their ministry despite a language barrier. In 2003 Father Padilla, who is from the Philippines, was ordained Bishop for the Apostolic Prefecture of Mongolia, although there are not yet sufficient Catholics for a diocese to be erected.

When the missionaries arrived, “we found basically no Catholics, but the people were searching,” Bishop Padilla said during an Oct. 16 teleconference from Ulaanbaatar.

As is often the case in new mission fields, the first step was to gain the good will of the people through acts of mercy. The first outreach program was to street children, and there were many wandering adrift in the capital. This ministry still exists as the Verbists Center, and along with that there are schools from pre-kindergarten through high schools, other shelters and two centers for special children.

Adults are not forgotten either, and they are assisted through programs to combat alcoholism and physical abuse — two serious problems the missionaries encountered.

As well as several parishes through the country there is now a beautiful Cathedral of St. Peter and Paul built in Ulaanbaatar, thanks to assistance from other parts of the Catholic world.

Numbers are growing, but slowly, “perhaps by about 20 each year,” Bishop Padilla said. By the most recent count the bishop estimates his flock includes 1,019 souls.

As a sign for the future, in spite of the relative small size of the congregation, there are two native Mongolians who have almost completed their studies for the priesthood. The first child Bishop Padilla baptized is now a lawyer and the secretary for the church community.

Recent statistics show Mongolia has about 80 Catholic missionaries, including members of religious congregations and lay volunteers. The country has four parishes and six substations. Social outreach programs include two centers for street children, a home for elderly men, two Montessori kindergartens, soup kitchens, a retreat center and many other programs.

Now in the country for 22 years, Bishop Padilla knows there is still much to be done but he still loves his mission.

“The  people are friendly, kind and hospitable,” he said.

PREVIOUS: What Mission Sunday Mass revealed about the church today

NEXT: Watch installation of Bishop Thomas in Toledo