What Mission Sunday Mass revealed about the church today 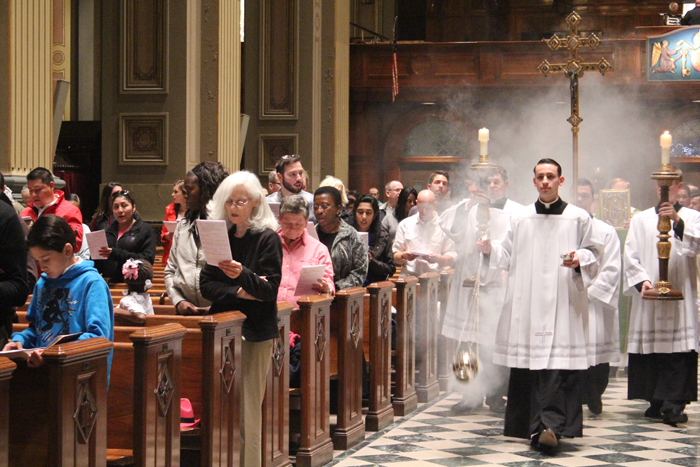 The procession enters the Cathedral Basilica of SS. Peter and Paul before the start of the Mission Sunday Mass Oct. 19, celebrated by Archbishop Charles Chaput with clergy and faithful from around the Archdiocese of Philadelphia. (Photos by Sarah Webb) 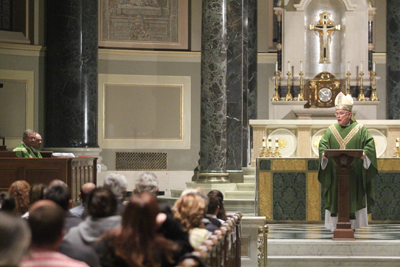 Archbishop Chaput preaches the homily at the evening Mass Sunday, Oct. 20 in the cathedral.

The Cathedral Basilica of SS. Peter and Paul was not especially filled for the evening Mass on Sunday, Oct. 19 and that played nicely into the first part of Archbishop Charles Chaput’s homily.

The occasion was World Mission Sunday, which means more than just another collection, even though as Archbishop Chaput noted, it is traditionally the largest of the special collections taken up in Catholic churches throughout the country.

“I’m 70 years old and when I was a boy everybody in Catholic school wanted to be a missionary,” he said. “That was true about the girls and about the boys. There was something about giving up your ordinary life and going to preach the Gospel of Jesus Christ in a land far away.”

That was a great act of generosity, he said, because back then before international travel was easy, a missionary might come home only once every 10 years. In previous generations, they never came home again.

Tracing back to the beginnings of the church, there were maybe 300 Christians after the death and resurrection of Jesus, he explained, and now when there are 7 billion or so people in the world there are 1.2 billion Catholics and another billion Christians who aren’t Catholic.

A problem today is that so many people especially in the younger generations are not going to church, he said, and while the sex abuse scandal in the church is part of the reason why, “if you look at the situation historically there has been a diminishing number of people going to church for the last 40 years and the reason for noticing it is that older people like me are dying out.”

It started, the archbishop suggested, when people of his own generation did not live the Gospel with the same enthusiasm as past generations. “You can’t pass on to others what you don’t have yourself,” he said.

He exhorted young parents to encourage their children to think about giving themselves to the Lord. “All of us here should support the missionaries of the church by our prayer and by our own support and care,” he said. Missionaries, he added, “don’t have to be priests and nuns. You have lay missionaries doing wonderful work throughout the church today.”

As for the Mission Sunday collection, “We should always put our money where our heart is,” he said. “We should be very generous so that our missionaries will be supported not only by our prayer but also have concrete help.”

Missionary work is a two-way street. While there are a number of Americans serving in the foreign missions there are also priests from other countries who serve in the United States.

At the Mass on Sunday, several priests from other countries concelebrated with Archbishop Chaput, as did Msgr. Arthur Rodgers, the former rector of the cathedral who is now director of the Office for the Propagation of the Faith, which oversees the annual Mission Collection. 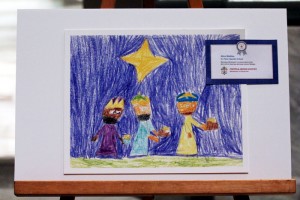 The art work of Alice Medina, a fifth grader at St. Peter the Apostle School in Philadelphia, was displayed along with three other students’ work at the cathedral, winners of an art contest sponsored by the Missionary Childhood Association. Median’s entry will also be displayed Dec. 5 at the Basilica of the National Shrine of the Immaculate Conception in Washington, D.C.

Also at the cathedral during the Mission Sunday Mass was the work of four local students who participated in the Missionary Childhood Association’s Christmas Artwork Contest.

The local winners were Alice Medina and William Green of St. Peter the Apostle School and Gianna Mars and Sydney Scott of Regina Coeli Academy. Alice’s art was chosen to be one of 24 from around the country to be exhibited at the Basilica of the National Shrine of the Immaculate Conception during a Dec. 5 ceremony.

“We are very proud of William and Alice,” said Sister Rosalia Federico, principal of St. Peter School. “The archbishop’s homily was very wonderful and heartfelt. He challenged the children to go beyond themselves and that is what we try to do here. Our children are very involved in social projects.

As for Alice, who is in fifth grade and looking forward to the December trip to the National Shrine of the Immaculate Conception, missions mean more than making a poster.

“It is putting others in front of myself. Helping others makes me feel good about myself,” she said.

But could she see herself as a missionary? Yes, and she knows where she’d go.

“I would probably like to go to Africa,” she said.

PREVIOUS: Catholics learn to use digital media for parish communications

NEXT: Church is growing in the far-off mission land of Mongolia