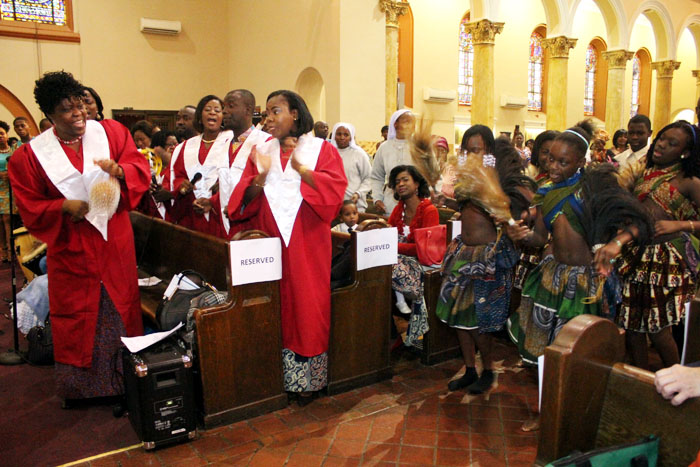 How many Masses have you gone to where the congregation was so happy to contribute they danced their way up the aisle to put their offering in the collection basket in front of the sanctuary?

That’s what happened at St. Cyprian Church at the 2 p.m. Mass on Sunday, Oct. 19. The Mass was the first annual African Heritage Mass, and the congregation was drawn from immigrants from all over Africa. Many attended in colorful attire distinct to their country, and no less than four choirs, backed up by various musical instruments including drums, contributed to the upbeat tempo.

There were families from Nigeria, Togo, Benin, Ghana, Kenya, Cameroon, Liberia, Sierra Leone, Congo and Ivory Coast, among other nations. St. Cyprian was a logical choice for the first Mass in what is intended to become a tradition, because it has weekly Masses for the Nigerian community as well as the Francophone community (those countries that were former French colonies).

Other African Masses in the Philadelphia Archdiocese include one at St. Ignatius of Loyola Parish for Ghanaians and at Our Lady of Hope Parish for Kenyans.

This was the very first time they all got together as one happy African family. You haven’t experienced joy in liturgy until you’ve seen an African Mass. Witnessing one you can see why the church is growing in Africa (but if you do plan to attend one, don’t worry about being late, the Mass probably won’t start on time anyway).

“I’m really happy the way it turned out,” said Matt Davis, the director of the archdiocesan Office for Pastoral Care for Migrants and Refugees. “There was a spirit of joy, and the people see the church is there for them.”

Putting the event together took a lot of planning, and Davis especially noted the work of a dedicated committee. Not the least among them was Holy Rosary Sister Florence Enechukwu, who has been in the United States for seven years, and previously for another eight years. She considers it her work to bring the entire African community in the area together, and she conducts a group that meets regularly to share their experiences in this new country.

As for the Mass, although this was the first annual Mass, “we hope in time we will be able to have it twice a year, and we will hold it at other churches that have African Masses,” she said.

Principal celebrant of the Mass was Father Livinus Ugochukwu, a Nigerian who celebrates Mass at St. Cyprian for Africans weekly and also a Mass for non-Africans at St. Martin of Tours Parish.

While the Ebola epidemic is rampant in some parts of Africa but in most areas it is not, nevertheless the disease is a concern. The second collection at the Oct. 19 Mass was actually for Ebola relief.

“It is not a problem in Nigeria,” Father Ugochukwu said, “but we have a concern whenever people are suffering and we want to help; they are our brothers and sisters. Of course we have a special concern because it started in Africa and we do have some Liberians (where it is most prevalent) among us. We want to help.”

NEXT: Bucks County teens have a field day at St. Bede’s