Founded to heal women overseas, these sisters continue the mission 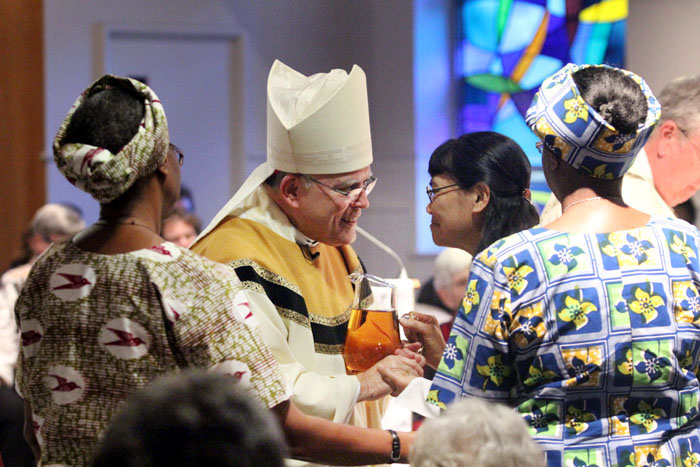 The Medical Mission Sisters, an international congregation of women religious, marked their 75th year in the Archdiocese of Philadelphia with a jubilee Mass celebrated by Archbishop Charles Chaput on Monday, Oct. 27, with Father Charles Bonner of nearby St. Cecilia Parish concelebrating.

Fittingly, their very first Mass at their Fox Chase convent was celebrated by another Philadelphia Archbishop, Cardinal Dennis Dougherty, on Oct. 3, 1939, according to Monica McGinley, the order’s public relations and development coordinator.

The Society of Catholic Medical Missionaries was founded in Washington, D.C., by Austrian-born Mother Anna Dengel (1892-1980). In 1911, Anna, a young teacher, became aware of a Scottish physician, Dr. Agnes McLaren, a Catholic convert who founded a small hospital St. Catherine’s in Rawalpindi, India (now in Pakistan), and could be called the Godmother of the Medical Mission Sisters.

Under the Muslim culture of the area where Dr. McLaren worked women could not be treated by a male doctor, unless he was a close relative. Because women also received little education there were no women doctors. Consequently thousands of women died for lack of proper medical care.

Dr. McLaren also became aware Catholic canon law at the time did not allow women religious to practice medicine. For this reason she actively sought a young laywoman who would train as a doctor to assist at the hospital. Anna, an idealistic and dedicated Catholic, volunteered to do this. Although Dr. McLaren died shortly after, Anna pursued further studies in Innsbruck and Medical School in Cork, Ireland; she sailed for India in 1920.

She spent four years at St. Catherine’s and in the surrounding area in an almost hopeless task of saving lives, considering the vast need. In 1925 she came to America where in Washington she and three companions founded the Catholic Medical Mission Society as a pious society, rather than as publicly vowed sisters, because of the Vatican prohibition. Indicative of the future international flavor of the Medical Missions Sisters, Evelyn Flieger, a nurse, was like Anna also from overseas, while Joanna Lyons, a doctor and Marie Ulbrich, a nurse, were American.

Cardinal Dougherty, a former missionary bishop himself, invited Mother Dengel to establish her headquarters in Philadelphia. He was also instrumental in having the rules of canon law changed, so in 1941 the Medical Mission Sisters were permitted to take formal public vows.

“It was Cardinal Dennis Dougherty, great friend and advocate of Anna Dengel, who invited her when our several houses in Washington, D.C., were too crowded for the growing number of MMS joining this new group,” said Sister Suzanne Maschek, who is Sector Coordinator of North America for the Medical Mission Sisters. “Cardinal Dougherty was a benefactor from the beginning of Anna Dengel’s time in the United States as she traveled around making known the plight of women and children in India where only women could fill this great need.”

As years went by, the Medical Mission Sisters who trained in Philadelphia traveled the globe overcoming great hardships while providing medical treatment and other services mostly to women and children regardless of creed, always faithful to the ideals of their foundress. Some, like the founding four, were doctors or nurses.

In 1947, as many congregations do, the Medical Mission Sisters transferred their headquarters to Rome, but in 1981 it moved to London where it remains to this day.

In any case the headquarters in Europe were more practical than the U.S. because it is closer to most of the mission fields where they worked.

At this time there are approximately 600 vowed sisters and 100 associates throughout the world, with 100 in North America in active ministry or retirement, mostly in the Philadelphia area, which remains the headquarters for the North American District. Many of the younger sisters are now drawn from the countries where the pioneering sisters served as missionaries and healers.

In the spirit of Mother Anna Dengel they live out their calling in various areas of medical, mental, spiritual and social treatment with a special focus on the needs and empowerment of women.

“We are grateful to God for the gift of our vocation, for the healing charism that finds its expression in so many areas of need in our world of today,” Sister Suzanne said. “We hold in gratitude all companions on the journey of making the kingdom present now by reaching out to one another in respectful ways to foster a culture of peace, harmony and justice for our world.

“We carry the rich legacy of Anna Dengel in our hearts and on our lips as we recall her words from our 30th anniversary in 1955: ‘… we learned to depend on God. In God we trust. In Mary, the cause of our joy, we confide. Our sisters, we rely upon. Our benefactors and our co-workers, we thank all of them for the share that they have taken in our Holy Experiment.’”

NEXT: Equipping Saints: A Pastoral Letter on Catholic Education and Faith Formation