Young and old pray rosary together for peace over 4 weeks 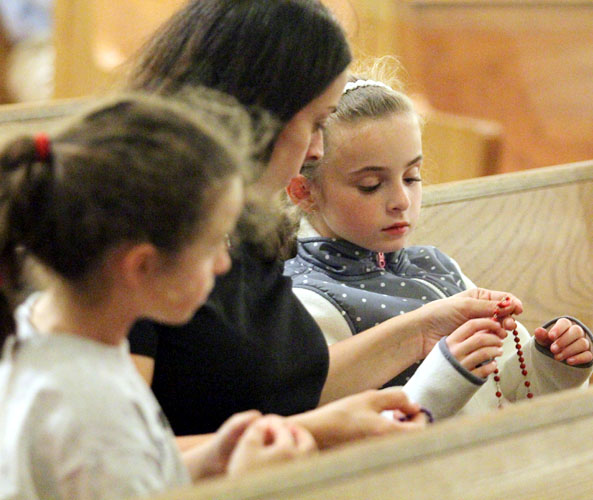 How often do you see approximately 150 men, women and children attending a parish rosary devotion, at least in this day and age? That’s what happened at St. Christopher Parish in Northeast Philadelphia on the four Tuesday evenings in October.

When Msgr. Joseph Garvin, pastor of St. Christopher Parish, was first approached by some of his parishioners with the idea of such a service he readily agreed, because October is the month of the holy rosary.

The specific petition of the prayer would be “World Peace and the End of Persecution of Christians in the Middle East.” At Msgr. Garvin’s suggestion it was billed as “Tuesdays for Mary,” and the time was set for 6:30 p.m.

(See a photo gallery from the Oct. 28 rosary devotion at St. Christopher’s here.)

Over time, St. Christopher’s has found 6:30 p.m. works well for programs that run a half hour or so because many people have already had dinner, but the events end early enough for people who like to dine later.

Even so, 150 people are more than anyone dreamed would come.

“I came every week,” said Mac Williams, one of the organizers. “God knows, but it will help world peace.”

On the other hand, Dave Ruskowski only attended the final week, but thought, “It is great, anything we can do to strengthen the church and increase devotion to Mary is good,” he said. “This is for peace in the world, peace at home, peace everywhere.”

Another organizer, Pat Gallo-Terrenzio, thought this was something all Catholics should do more often. “We were pretty surprised so many people came but it proves that many will come to pray for a powerful reason,” she said.

Maybe more parishes should try to do this, thought Ed Moffit. “They might be surprised at the response they would get. I say the rosary by myself a lot, but to come together as a group is great.

As might be expected, a great many of those who attended the service had fond memories of a previous era when the recitation of the rosary was commonplace, not something to be remarked about.

But there were enough younger people to show that there may well be a revival going on for devotional prayer.

Take for example Sarah Martin, a young mother who attended with her little twins, first graders Addison and Natalie, who also prayed with her.

“They know the rosary and I like to bring them,” she said. “We pray to the Blessed Mother as a family; she is very important in our lives.”

NEXT: Poverty was among synod’s major concerns, Philippine cardinal says