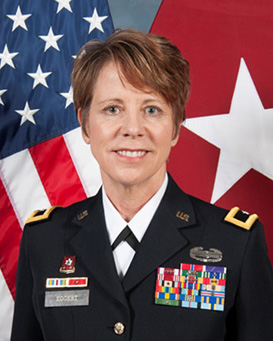 The presentations to be held Tuesday, Nov. 11 in Gabriele Library include:

Brigadier General Eggert will deliver the keynote at 6:30 p.m. in the Green Room at Villa Maria Hall.

Eggert recently retired as assistant adjutant general for the Pennsylvania Army National Guard and as deputy commandant-reserve affairs at the United States Army War College at Carlisle Barracks. She has been instrumental in the integration of women into the military.

Her military career began with 10 enlisted years at the Women’s Army Corps. Commissioned in 1985 through the Officer Candidate School, Eggert has served in a wide variety of field assignments including battalion command and overseas deployments to Germany, Italy, Nicaragua and Lithuania.

General Eggert was awarded the Purple Heart for an injury suffered from a roadside explosive. She is also the recipient of the Bronze Star and Legion of Merit.

Immaculata will honor America’s veterans with a week-long observance and a special remembrance of the approximately 555 veterans of the Second World War who die every day, according to the National World War II Museum.

As part of the Veterans Day celebration, 100 flags will be placed at various locations around campus. Each flag represents 220,000 veterans in the United States.

The Gabriele Library will display a selection of military books and materials in the lobby, and a mini-museum of wartime posters will be open for viewing in the Rotunda of Villa Maria Hall throughout the week.