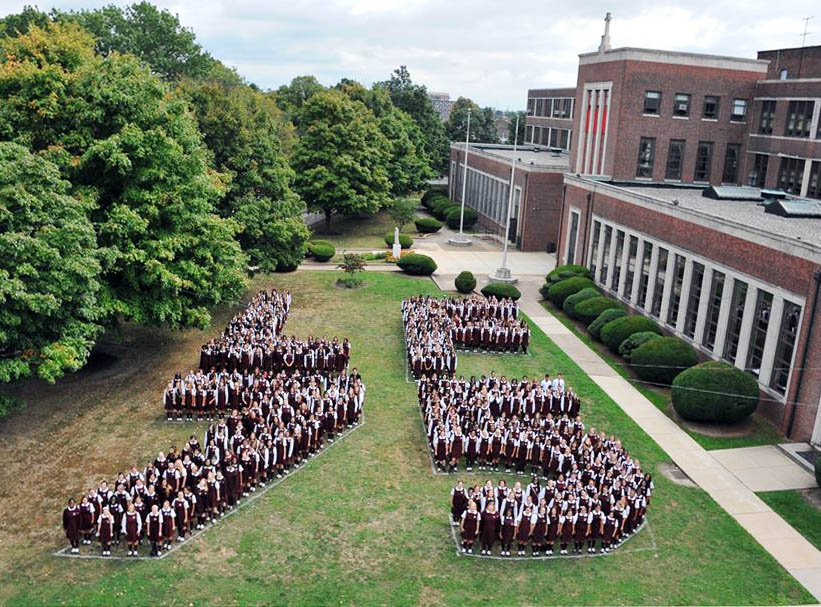 After Mass Oct. 1, the feast of St. Therese of Lisieux, students of Little Flower High School gathered on the front lawn to spell out their special occasion and sing their alma mater. (Sarah Webb)

Philadelphia’s Little Flower High School officially marked its 75th anniversary on Oct. 1, which by no coincidence happened to the feast of St. Therese of Lisieux, the Little Flower.

(See a gallery with 20 photos from the celebration here.)

Back in 1939 when it opened the name was hand-picked by Cardinal Dennis Dougherty, who had tremendous devotion to St. Therese, to the point that he was instrumental in promoting her cause for sainthood, which came to fruition in 1925.

Little Flower High School, located at 1000 West Lycoming Street, was built just as the whole country was recovering from the Great Depression and it was not a sure thing the money to cover the construction could be raised.

“Cardinal Dougherty wanted to build a school dedicated to her and he prayed to her that the funds be made available,” said Father Joseph McCaffrey, Little Flower’s school minister. “I think he doubled what he expected to receive.”

The cardinal was especially impressed by St. Therese, who at the age of 14 appealed directly to the pope for permission to enter the Carmelites, Father McCaffrey explained. “She was saying this is my vision of what God is inviting me to,” he said. “That’s our theme this year. The students see her as a saint but also as a close friend, someone they can speak to.”

As part of the celebration, Bishop Robert Maginnis celebrated the anniversary Mass, and it was a happy choice — he too has devotion to the Little Flower, as exemplified by the first-class relic of the saint he always carries, and showed to the students.

The impressive procession at the Mass exhibited the 75 class banners for the estimated 35,000 alumnae of the school, according to Immaculate Heart Sister Donna Shallo, Little Flower’s president.

After the school was founded, Cardinal Dougherty wrote to Mother Agnes, St. Therese’s birth sister, who was still superior at her carmel and asked if she would compose a prayer for the students of the new school.

The prayer Mother Agnes composed, as translated from the French, reads, “I beg my little sister saint to obtain roses highly perfumed with grace for the Little Flower High School in Philadelphia and its entire personnel.”

A printed card of this prayer was given to each student at the celebration and also a rose, the flower that is so identified with the Little Flower.

“We keep her alive, she is not just a statue for our girls,” Sister Donna said. “We do stress her Little Way.”

“October 1, 2014 is a day I will never forget,” commented Little Flower senior Erin Crowley. “I was lucky enough to celebrate 75 years of a school that has given me so much and I am grateful.”

PREVIOUS: Know the candidates in Pa. before Nov. 4 election

NEXT: Ladies first – Daughters of Charity mark 200 years in city