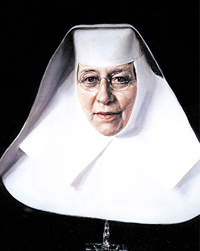 Wednesday, Oct. 1 is the 14th anniversary of the canonization of St. Katharine Drexel. People familiar with the life of this saint from Philadelphia know about her works of charity for the African Americans and Native Americans in the United States. But as Blessed Sacrament Sister Patricia Downs reminds, St. Katharine’s charity extended to other people as well, especially families hit hard during the Great Depression.

Below she conveys a testimonial from such a family whose members still gratefully visit the National Shrine of St. Katharine in Bensalem and the motherhouse of the Sisters of the Most Blessed Sacrament, the order she founded.

“Our mother’s family was blessed by St. Katharine during the Depression. When my Grandpop Hughes was injured at his job for the Pennsylvania railroad, Mother Katharine sent word for them to come to the convent every day for food until he was able to go back to work.

“St. Katharine knew they had seven children to feed and Pop had scared the KKK away one night a few years earlier doing his job as Constable of Bensalem. She never forgot him for that and so Mommy and two of her brothers would take the wagon and walk to the convent and get fresh baked bread and fresh milk for the family.

“She was a saint even then, before the miracles.”