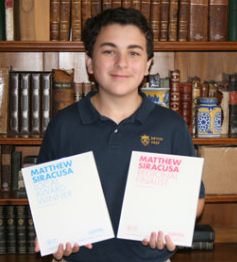 An interest in the environment and desire for a cleaner and safer world recently earned Devon Prep freshman Matthew Siracusa of Newtown Square a local award and regional finalist recognition in the 2014 International Google Science Fair.

The fair is a global online science and technology competition open to individuals and teams from ages 13 to 18.

Siracusa was recognized for his project “A Method for Mobile Study of Fracking Sites.” Hydraulic fracturing or “fracking” is the process of drilling and injecting fluid (usually chemicals and sand suspended in water) into the ground at a high pressure in order to fracture shale rocks to release natural gas inside. The fracking process can release radon and methane, and the liquid that is pumped contains dangerous chemicals. The equipment associated with fracking also releases pollution including volatile organic compounds (VOC).

“I hope that in the future my life leads me to a career in science and engineering,” Siracusa said. “I desire a cleaner and safer world and would like to continue my environmental studies.”

Siracusa tested his monitor in the Marcellus shale area of Pennsylvania where he traveled to two well sites (five well heads). His field tests found a relationship of increased radiation in the vicinity of hydraulic fracturing sites, confirming the results performed by other institutions.