It just takes one to win 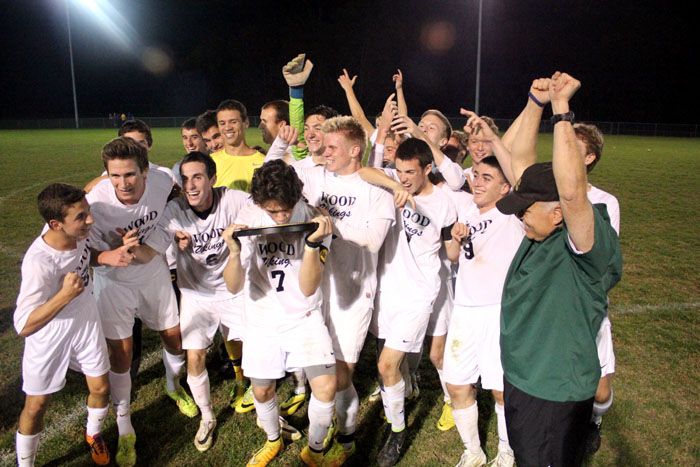 But in soccer, that doesn’t much matter if you can’t find a way to get the ball inside the cage.

In the Catholic League boys’ championship Tuesday night, Oct. 28 at Archbishop Ryan High School, the only person who figured out how to do that was senior Matt McWilliams, and because he happens to play for Archbishop Wood, the Vikings were crowned as Catholic League champions.

After taking a perfect corner kick pass from senior Dan McDonald, McWilliams was able to guide the ball past a startled Roman Catholic defense early in the sudden-death, second-overtime period to give Wood a 1-0 title victory.

This was a year in which several teams had a legitimate chance to capture the Catholic League plaque. That’s not a particularly surprising reality in the Catholic League, which is packed with enormous talent and great coaching. However, this year was tough to predict an ultimate survivor.

“Every game is hard fought,” said Wood coach Joe Krantz. “It doesn’t matter which two teams are playing. It doesn’t matter where they are in the standings. You know that anything can happen. We remind our players of that, but I don’t think they need reminding. They are aware of the Catholic League tradition.”

In typical fashion, Krantz deflected must of the credit toward his players.

“They did a great job,” he said. “They were willing to put in the hard work.”

NEXT: Charitable hockey foundation gets top award from Neumann U