Charitable hockey foundation gets top award from Neumann U 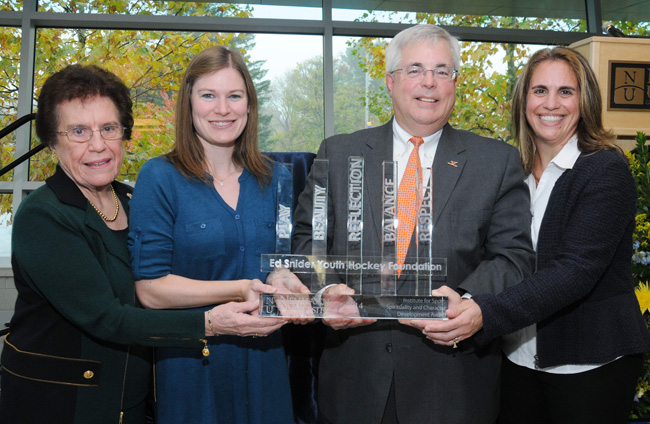 The Ed Snider Youth Hockey Foundation received the 2014 Institute for Sport, Spirituality and Character Development Award from Neumann University Nov. 6 in a ceremony held in the Mirenda Center on the Aston campus.

The Institute Award recognizes individuals and organizations that exhibit strong character through athletics, exemplify spirituality and embody the good that exists in and through sports.

For the first time, thanks to an anonymous donor, the Institute Award was presented this year in honor of the late Bishop Joseph McFadden, a longtime friend of the university. Bishop McFadden served the Archdiocese of Philadelphia and the Diocese of Harrisburg until his death in May 2013.

Since its founding by Philadelphia Flyers owner Ed Snider in 2005, Snider Hockey has provided equipment, ice time and experienced coaching at no cost to children who otherwise would not have the opportunity to participate in hockey. More than 3,000 children from Philadelphia and Camden, N.J., participate annually.

Beyond exposure to the sport, the foundation sponsors off-ice programs that teach

children to value academic and personal development by emphasizing the importance of schoolwork, mutual respect and good citizenship.

According to the foundation’s website, the mission of Snider Hockey is “to build lives and unite communities, helping young people to succeed in the game of life.”

Jim Britt, chief operating officer of Snider Hockey, accepted the award on behalf of the organization. He described the key to the program’s success as “creating an environment where kids can be honest and open, and building a culture of trust.”

He also cited the leadership of Snider, chairman of Comcast-Spectacor. “Whenever Mr. Snider sees me, he always asks two questions: how are the kids and what more can we do?” Britt said.

“Snider Hockey truly captures the spirit of the Institute Award,” said Lee DelleMonache, director of the institute. “The foundation’s work exemplifies our core values by expanding kids’ horizons and nourishing their souls through the game of hockey and the gift of physical play. Their work in the Philadelphia and Camden areas is invaluable to the thousands they have touched, and it is a privilege to recognize every member of the Snider Hockey family for the opportunities they provide to deserving kids.”

Past recipients are Anne Donovan, head coach of the WNBA’s Connecticut Sun and Olympic gold medalist (2013), the Philadelphia Chapter of Coaches vs. Cancer (2012) and Keith Primeau, former captain of the Philadelphia Flyers (2011).

PREVIOUS: It just takes one to win

NEXT: Catholic League teams play in semis and finals this weekend