Catholics eager to enjoy family and papal events next year 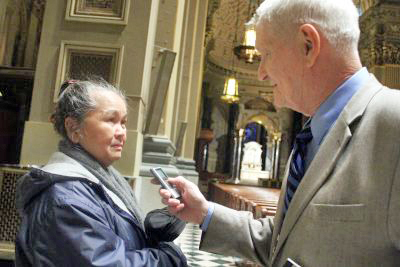 Lou Baldwin (right), reporter for CatholicPhilly.com, interviews Sonia Martinez on her reaction to the announcement of the papal visit Nov. 17 at the Cathedral Basilica of SS. Peter and Paul in Philadelphia. (Sarah Webb)

Perhaps it should be expected, but worshipers at the noon Mass Nov. 17 at the Cathedral Basilica of SS. Peter and Paul were universally enthusiastic as they reacted to the news that Pope Francis has confirmed he will visit Philadelphia next September.

Because it’s part of the 2015 World Meeting of Families, “It’s an opportunity for teenagers and young people to see him,” said Suzana Melo, who was just visiting the city. “I can’t be there because I’m leaving for Brazil tomorrow,” she said. “I just came here for Mass to thank God for everything he does for us.”

Charlotte Morris of St. Charles Borromeo Parish in Drexel Hill, who attends the cathedral Mass on weekdays because she works nearby, said, “It will be wonderful to see him; he truly cares about people.”

She still remembers seeing Pope John Paul II at Castel Gandolfo when she and her late husband were celebrating their 25th anniversary. “There isn’t anything more important than the family. If you don’t have that you don’t have anything,” she added.

Brian Fox, a member of St. Patrick Parish in Philadelphia, has never seen a pope before, although he remembers seeing many reminders of a papal visit during his trip to Ireland last year.

Lorraine McGirt of St. Charles Borromeo Parish, South Philadelphia, found the prospect “exciting and inspiring.” She not only plans to attend the lectures and workshops, but has applied to serve as a host family. 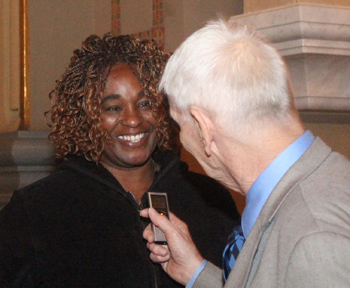 Lorraine McGirt of St. Charles Borromeo Parish, South Philadelphia, speaks to reporter Lou Baldwin Nov. 17 at the cathedral. She not only plans to attend the World Meeting of Families’ lectures and workshops next September, but has applied to serve as a host family. (Sarah Webb)

“This is important at a time when families aren’t caring for each other the way they should and particularly because of the strife that is happening in the Catholic Church,” she said. “The family isn’t just your immediate family; it is all of the church.”

“My family will be out of state, but hopefully I will be able to be here,” said Sonia Martinez, who attends Mass at the cathedral when in Philadelphia. “The family is the basic unit of society; without it there is no order, nothing.”

“I just heard about it this morning. How can you not think it is great?” said Paul Prettyman, of Holy Family Parish in Sewell, N.J. “My wife and I will be here for it.”

Tom Forsythe, of Holy Cross Parish in Philadelphia’s Mount Airy section, declared, “It’s fine that the pope is coming. I hope to get a chance to attend and I hope the city provides some means of transportation other than have people trying to come in private vehicles.”

It seems a safe bet, whether it be trains, planes or automobiles, the City of Brotherly Love will have quite a crowd come September.

NEXT: ‘Thrilled’ at news of papal visit, Philadelphia Catholics are thinking big