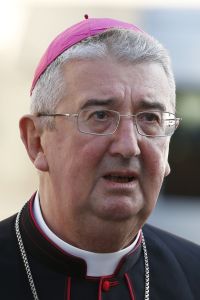 A month after attending the extraordinary Synod of Bishops on the family, Archbishop Martin described Pope Francis’ prophetic yet pragmatic vision for the church during a Nov. 12 interview with Catholic News Service while he was at Villanova University in Pennsylvania.

“The pope recognizes that the social teachings of the church are not abstract reflections or analyses,” said Archbishop Martin. “They are primarily a call on the church to be close to people, especially those who need closeness, those who are troubled, anxious and lonely. This idea of closeness embodies an acceptance, understanding and loving of others. The church that refuses to do that may be able to repeat doctrine, but it may not actually be living the life of Jesus Christ.”

“The very minute we hear the Gospel message, there is a primary and fundamental response to desire, to seek and to protect the good of others,” said the archbishop. “It is our faith in Jesus Christ who became poor and loved the outcast that acts as the basis for this, and Pope Francis reminds us that this social concern is not an optional extra for our faith.

Sponsored by the university’s Office for Mission and Ministry and the Journal for Catholic Social Thought, the archbishop’s lecture was part of a yearlong series focused on Catholic social teaching and the financial crisis.

“When we talk about world financial systems,” said Archbishop Martin, “we have to recover our awareness that the market and the economy are indeed part of a broader picture that includes other values more important than economic values. This isn’t moralizing — an economy is more sustainable when it springs up within a stable society in which human needs are addressed and in which all people have a voice. Exclusion weakens any society. Exclusion, therefore, damages an economy.”

Throughout the lecture, Archbishop Martin emphasized the way Pope Francis promotes love and acceptance of others in his apostolic exhortation, “Evangelii Gaudium” (the Joy of the Gospel), as well as in his own life.

“For me, one of the most striking gestures was the pope’s encounter with a young man whose face was completely covered with sores,” said the archbishop. “He got out of the jeep in the square, but he did not do what most of us would have done. Instead of greeting him from a safe distance and asking his doctors what disease he had, Pope Francis simply kissed him. The pope saw here not a problem, but a person.”

Emphasizing the pope’s call to move away from a “globalization of indifference,” Archbishop Martin highlighted a communal responsibility to reach out to “our brothers and sisters in Christ.”

“When God created humanity, he created it as a family,” said the archbishop. “This isn’t a simple affirmation — this affirmation gives us the real responsibilities of solidarity and promotes a familial relationship of love between peoples. It’s also the principle which should guide the process of globalization. Globalization will be worthy of its name if it’s actually global, if it enhances the unity of the human family.”

Archbishop Martin asserted that Catholic social teaching must maintain a heartfelt willingness to address the real-world experiences of all people while still unapologetically upholding church doctrine on matters of marriage, relationships and family.

Looking forward to next year’s world Synod of Bishops, Archbishop Martin identified married couples as a primary source for the love and aid that Pope Francis advocates.

“If I were to ask anyone who are the instruments for pastoral care, they would talk about priests, nuns, paid lay ministers, but very few would say married couples and that’s the reality we have to move toward,” said the archbishop. “We need to see that married couples are out there working as a strong part of the church’s evangelizing effort and encourage the work that they do with the marginalized members of our society.

“Solutions don’t come from closed meeting rooms,” he added, “and the outcome of the next synod must be to make marriage and the family much more central in the pastoral work of the church.”

PREVIOUS: Pope’s visit to city will be ‘a moment unlike any other,’ Archbishop Chaput says

NEXT: Catholics eager to enjoy family and papal events next year