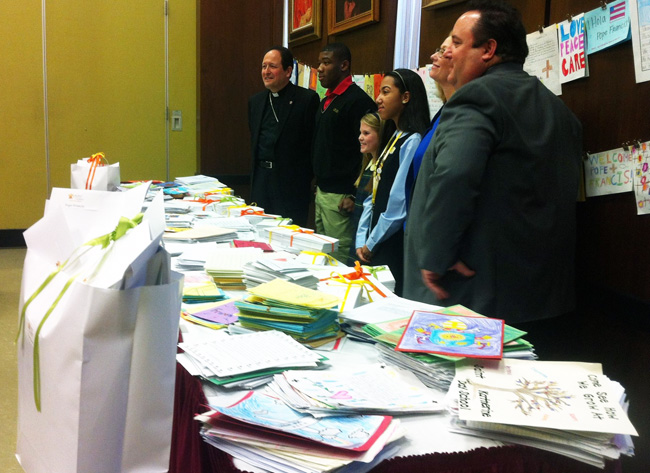 Officials from the Archdiocese of Philadelphia and World Meeting of Families review some of the thousands of letters going to Pope Francis from Catholic school students in the archdiocese, during an event Nov. 14 at the Archdiocesan Pastoral Center in Philadelphia. 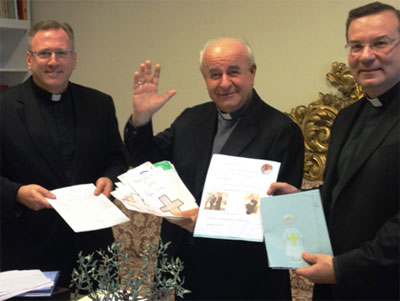 Receiving letters in Rome from three Catholic school students in the Archdiocese of Philadelphia, which represented some of the 10,000 letters to be sent to the Vatican inviting Pope Francis to visit the city next year, are from left Father William Donovan, liaison of Archbishop Chaput to the Pontifical Council for the Family; Archbishop Vincenzo Paglia, president of the council; and Msgr. Carlos Vazquez, on staff at the council.

Students from across the Archdiocese of Philadelphia have been working for months to write letters inviting Pope Francis to Philadelphia, and today 10,000 of the cards and letters are being sent to the Vatican.

Receiving them in Rome will be Archbishop Vincenzo Paglia, president of the Pontifical Council for the Family, who invited students to write the letters when he visited Philadelphia last May in a preparatory trip leading up to next year’s World Meeting of Families in the city.

The council is a sponsor of the meeting expected to welcome up to 15,000 people from around the world for a week of conferences and discussions concerning the role of the family in society.

Calling himself “Archbishop Mailman,” the prelate told students at Roman Catholic High School in Philadelphia that he would deliver their messages to Pope Francis.

Three students representing Catholic elementary, secondary and schools of special education in the archdiocese attended an event Nov. 14 at the Archdiocesan Pastoral Center where they were recognized for their efforts by representatives of the 2015 World Meeting of Families organization and the archdiocesan Office of Catholic Education.

Emma Clift of St. Francis of Assisi School in Springfield, Siani Colon of John W. Hallahan Catholic Girls’ High School in Philadelphia and Miles Lee of St. Katherine Day School in Wynnewood learned their letters were presented personally to Archbishop Paglia by Father William Donovan, the Philadelphia priest who is liaison for Archbishop Charles Chaput to the Pontifical Council for the Family in Rome.

“Every day we hear about the excitement for the 2015 World Meeting of Families,” said the organization’s executive director, Donna Farrell, “but there has been nothing more powerful than seeing the thousands of letters pour into our office asking the Holy Father to join us here. 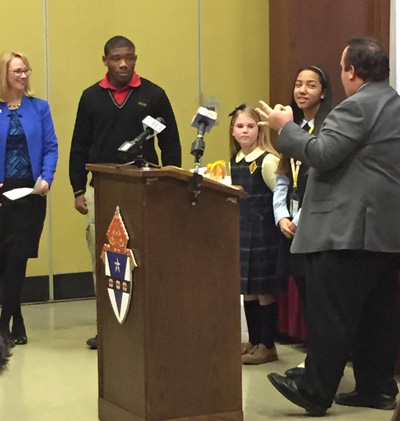 Speaking Nov. 14 with Chris Mominey (right) of the archdiocesan Office for Catholic Education are (from left) Donna Farrell of the 2015 World Meeting of Families, Miles Lee of St. Katherine Day School in Wynnewood, Emma Clift of St. Francis of Assisi School in Springfield and Siani Colon of Hallahan High School in Philadelphia.

“These letters, which were written with such love, joy and care, truly showcase our students’ great enthusiasm for Pope Francis and their great pride in wanting to welcome the world here next year. We are incredibly grateful that, with the help of Archbishop Paglia, Pope Francis will receive these letters and better know the joy a visit to Philadelphia would bring our students.”

At the event, the students were the first to learn news that will affect all their Catholic school counterparts: All classes will be cancelled from Wednesday to Friday, Sept. 23 to 25, 2015, at all archdiocesan schools to allow teachers and families to participate in the World Meeting of Families.

Archdiocesan schools have already begun preparing students for the event by using lesson plans based on the preparatory catechesis, “Love is Our Mission: The Family Fully Alive.” Many activities are being planned for students and families across the archdiocese, including a region-wide Day of Service, details for which have not been announced.

With the decision to cancel classes, the Catholic education office aims to encourage engagement of the World Meeting itself and its supporting programs.

“We have almost 60,000 students in the Archdiocese of Philadelphia and when I walk through the halls of any one of our schools, I can feel the students’ palpable excitement when we discuss a possible visit to Philadelphia by Pope Francis,” said Christopher Mominey, secretary and chief operating officer of Catholic education for the archdiocese.

“The World Meeting of Families is a once-in-a-lifetime experience and we want to ensure that our students, with their families, have the chance to attend the many exciting events associated with it. This is a wonderful opportunity to reinvigorate families and, hopefully, to welcome a transformative world leader to our great city.  To me, there is no greater learning experience for our students than participating in this truly global event.”

NEXT: It’s official: Pope Francis is coming to Philadelphia