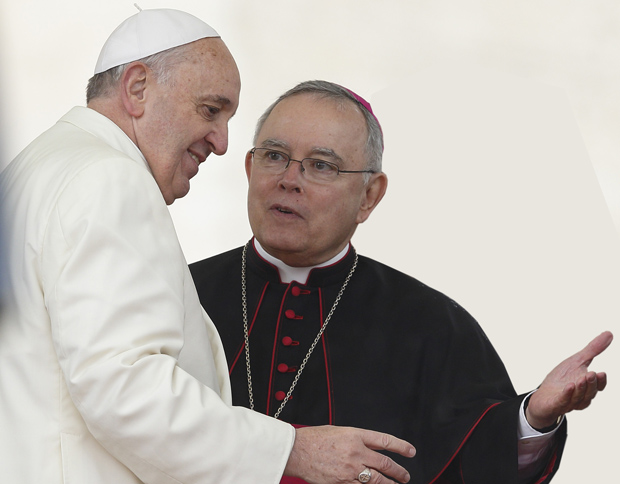 UPDATED — Pope Francis ended months of eager speculation by confirming he will visit Philadelphia next year.

During a meeting on marriage at the Vatican this morning, Nov. 17, the pope said he intends to visit Philadelphia at the conclusion of the Sept. 22-25, 2015 World Meeting of Families in Philadelphia.

“I wish to confirm according to the wishes of the Lord, that in September of 2015, I will go to Philadelphia for the World Meeting of Families,” Pope Francis said in Rome. “Thank you for your prayers with which you accompany my service to the Church. Bless you from my heart.”

Although few details of the papal visit have been made public, organizers for the families’ congress expect Pope Francis to arrive Friday, Sept. 25 for an afternoon public visit with civic officials.

That would begin his first trip as pope to the United States and the second papal visit to Philadelphia in a generation; St. Pope John Paul II visited the city in 1979. Francis will be the fourth sitting pontiff to visit the U.S.

Archbishop Charles Chaput is in Rome attending a three-day interreligious conference on traditional marriage, “Complementarity of Man and Woman,” during which the pope broke the long-anticipated news of his visit. (See the official English translation of the pope’s talk).

The archbishop said he was “overjoyed” by the announcement.

“A hallmark of his papacy,” the archbishop said of Pope Francis, “has been a keen focus on the many challenges that families face today globally. His charisma, presence and voice will electrify the gathering.

“As I’ve said many times before, I believe that the presence of the Holy Father will bring all of us – Catholic and non-Catholic alike – together in tremendously powerful, unifying and healing ways. We look forward to Pope Francis’ arrival in Philadelphia next September and we will welcome him joyfully with open arms and prayerful hearts.”

During his visit, Pope Francis is expected to attend the Festival of Families on Sept. 26, a cultural celebration for hundreds of thousands of people along Philadelphia’s main cultural boulevard, the Benjamin Franklin Parkway.

Donna Farrell, executive director for the 2015 World Meeting of Families and its chief planner, said the festival will be a “prayerful, fun, exciting celebration of world-class entertainment.”

Although Philadelphia has hosted St. Pope John Paul II’s visit in 1979, the city has “not had anything like this unique Festival of Families. It’s really going to be something special,” Farrell said.

Registration for the congress opened last week, and the first details on the content of programming for the week-long series of talks, discussions and activities also came to light. Only last Friday, 10,000 letters written by Catholic school students in the Archdiocese of Philadelphia were sent to Rome inviting Pope Francis to Philadelphia.

Farrell led a press conference with civic officials and business leaders at the Philadelphia Museum of Art Nov. 17 to mark the announcement of the papal visit.

Pope Francis is expected to celebrate a public Mass on Sunday, Sept. 26 at the Art Museum. Farrell estimated up to 2 million people would attend the Mass from across the Philadelphia region, the nation and the world.

The pope will have a spectacular view of his unique congregation from a stage located in front of the statue of George Washington on Eakins Oval, at the museum’s steps on the parkway.

At the press conference, Philadelphia Mayor Michael Nutter led a chorus of superlatives looking forward to next September. “What a historic day, an unparalleled day,” he said. “This will be the largest event in the city’s modern history.

“We are deeply honored that one of the world’s most transformative leaders, Pope Francis, is coming to Philadelphia, the city of families.”

While he was joined in expressions of excitement for the papal visit by Farrell, also adding their enthusiasm was Susan Corbett, wife of Pennsylvania Gov. Tom Corbett; Robert Ciarufolli, partner of the accounting firm Baker Tilly and president of the 2015 World Meeting of Families; and Daniel Hilferty, president and CEO of Independence Blue Cross and chair of the executive leadership committee for the families’ meeting.

Ciarufolli said residents, business leaders and volunteers from the region working with city, state and federal officials “must and will provide a flawless series of events” for the Sept. 22-27 gathering. He also read remarks from Archbishop Chaput at the press conference.

“It’s a great honor and an exciting time for Catholic education, a time for students to be part of history,” said Kelly Lanza, assistant principal at Cardinal O’Hara who led a contingent of 30 student council members to the Art Museum. “Pope Francis is igniting faith in young people. I am hoping to see the same passion here as at World Youth Day” in Rio de Janeiro, Brazil, which Pope Francis visited in 2013.

When Tatiana Lima of center city Philadelphia first heard the news of the papal visit Monday morning, she started clapping, elated as she headed out for early morning Mass at the Cathedral Basilica of SS. Peter and Paul.

She sees the spiritual benefits in store for people who join the pope in the city next year.

“I think people are enlightened with more grace,” she said. “It’s awesome.”

A native New Yorker, Lima has family in Brazil. They told her all about the visit of Pope Francis to Rio de Janeiro, and what his visit promises for Philadelphia in 2015. “It was fun!” she said, adding she was glad to have a center city condo just blocks from the cathedral.

As a young teacher at St. Francis Xavier School in the city’s Fairmount section, Luke Ertel is not old enough to remember Pope John Paul II’s visit to Philadelphia. But he believes the forthcoming visit of Pope Francis will be a sign of unity.

“He is the shepherd of the whole Catholic Church, including us here in the United States,” Ertel said. “People will be coming for the World Meeting of Families from all over the world so it’s inspiring to see the unity we have in our own parish but also as part of the global church community.”

Then as now, “the eyes of the country will be on Philadelphia,” he said.

He likened the visit of a pope to that of a parish priest visiting the home of a parishioner.

“With his reassuring presence he represents the concern of Christ, and not only for that person but for the parish too,” the bishop said. A visit by the pastor of the universal church — the pope — “magnifies that concern of Christ by a thousand times.”

The visit “is a particular grace and blessing for the whole country and it’s important to see it that way.”