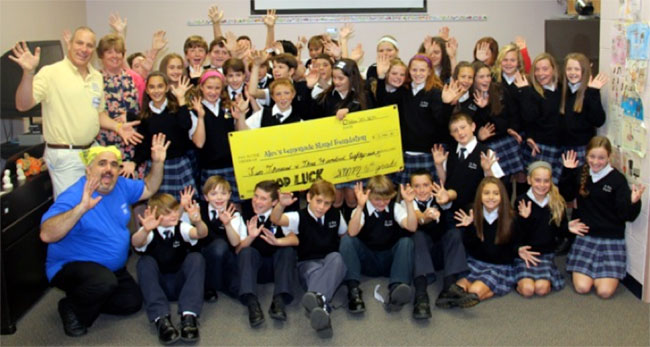 With guidance from teacher David Muscarella, sixth graders from St. Mary Magdalen Catholic School in Media recently raised $2,386 for Alex’s Lemonade Stand. They ran, walked and biked a total of 7,396 miles as a team in Alex’s Million Mile during the month of September.

Jay Scott, father of Alex Scott, who founded Alex’s Lemonade Stand in 2000 when she was 4 years old and who succumbed to cancer in 2004, visited St. Mary Magdalen Oct. 29 to accept the funds raised by the sixth graders and thank them personally.

Throughout National Childhood Cancer Awareness Month, teams across the country logged 891,214 miles in just one month. The teams missed hitting the million mile goal, but they raised an unprecedented amount of awareness of the need to support childhood cancer research.

NEXT: Saints come to life in reports by second graders