Catholic League teams play in semis and finals this weekend 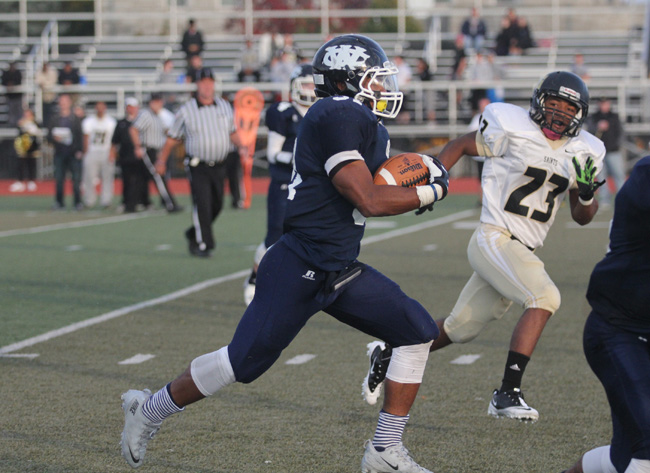 West Catholic will try to run away with the Catholic League Class AA championship in a rematch of last year's final against Neumann-Goretti at 4 p.m. Saturday, Nov. 8, at Cardinal O’Hara High School, Springfield. (Photo by Sarah Webb)

It seemed like yesterday that football season was just beginning. But time really does fly when you’re having fun.

And having fun is what Catholic League fans enjoyed for the past 10 weeks. Now, it gets even better because the postseason has officially begun.

Below is a brief synopsis of each Catholic League playoff game. Seeds one through four are in parentheses.

If the Prep needs a big play, it might turn to sophomore D’Andre Swift (711 yards from scrimmage and seven touchdowns). For Judge, senior quarterback Zack Carroll (1,069 passing yards, nine TDs) is healthy after suffering a concussion; he did not play against the Prep during the regular season.

Prediction: The Prep will throw much experience at the Crusaders and prevail, 38-7.

Summary: The Explorers arguably have the best quarterback-receiver combination in the area. Senior QB Kyle Shurmer (2,238 passing yards and 26 touchdowns) and senior Jimmy Herron, the all-time Catholic League leader in TD receptions (61 receptions for 834 yards and 12 scores this year) create havoc for defensive coordinators. If that isn’t working, the Explorers will hand off to senior Jordan Meachum (121 carries for 655 yards, 8 rushing and 3 receiving touchdowns) or throw to senior tight end Charlie Hemcher (35 catches for 549 yards).

Prediction: La Salle desperately wants another crack at the Prep, but to do that the Explorers must get past the Cahillites. That they will do by a score of 34-14.

Summary:  The Vikings are 8-1 overall and in their three division wins outscored their foes by a scary 147 to 13. Senior Jarrett McClenton does most of the damage on offense. He has gained 1,158 yards on 109 carries and scored 19 touchdowns (two of them receiving). Aforementioned junior QB Russo has tossed 20 touchdown passes, two of them against O’Hara. In the All-Catholic voting, the Vikings dominated.

For O’Hara, RB Max Ferguson has rushed for 1,060 yards and five TDs and receiver Darell Jackson has caught 44 for 590 yards. The Lions will try to maintain focus despite playing without their interim head coach and division Coach of the Year Paul Strus (he replaced the late Danny Algeo, who passed away in July). Strus has been placed on administrative leave; offensive coordinator John Ward will take over for now.

“The interim head football coach at Cardinal O’Hara High School was placed on leave based on concerns that were voiced to school administration regarding his professional behavior,” said Ken Gavin, communications director for the Archdiocese of Philadelphia. “That matter is being looked into at this time and his status is pending the outcome.”

Prediction: Competition wise, Wood should be in the AAAA. The Vikings are much too strong against an overmatched O’Hara squad that enters the game 1-8 overall. Wood will win, 48-0.

Earlier meeting: In a classic finish, QB Collin DiGalbo threw a seven-yard touchdown pass to Tyler Higgins and the pair connected for a two-point conversion toss with no time remaining on the clock to give Bonner-Prendie a thrilling 21-20 victory.

Prediction: This is probably the game of the week. It has overtime written all over it, but such an outcome is unusual. The Raiders didn’t make the playoffs last year despite going 8-3 and beating two state champs (the Prep and Wood) during the regular season. Many of those players remain annoyed at that. Buoyed by long-lasting motivation, the Raiders will edge the Friars, 28-27.

Summary: West Catholic (7-3), which defeated Conwell-Egan in the semifinals, blitzed through the division. Despite losing QB Antwain McCollum midway through the season (he had already established a school record for passing yards), the Burrs continued to excel behind Ruley (832 yards and nine rushing TDs) and sophomore RB Calil Wortham (10 TDs). For Neumann-Goretti, which bested Lansdale Catholic in the semis, quarterback Ray Lenhart completed 80 passes for 1,254 yards and 11 TDs; sophomore RB Aamir Brown scored five TDs rushing and five more receiving. He also picked off four passes.

PREVIOUS: Charitable hockey foundation gets top award from Neumann U