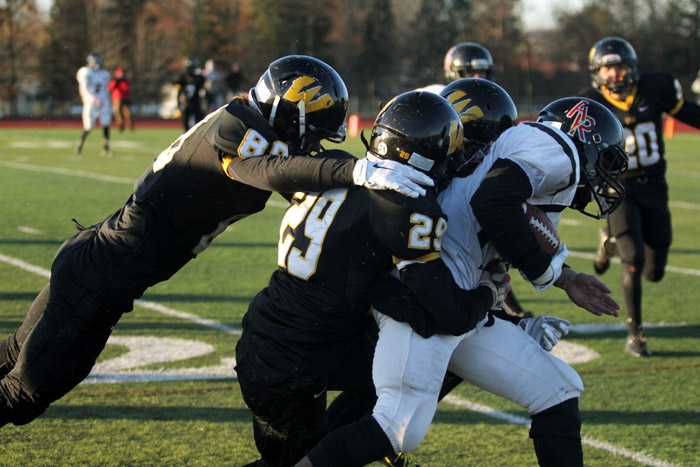 It was one of those days for Archbishop Ryan, summed up here as Ryan running back Samir Bullock is corralled by (from left) Archbishop Wood's Patrick Carroll, Michael Pristas and Chris Baker. (Sarah Webb)

The players’ collective reaction said it all.

After the final seconds had ticked away from the Catholic League AAA championship on Nov. 15 at Plymouth-Whitemarsh High School, Archbishop Wood (10-1) had the countenance of a team that had just won a regular-season game.

Maybe that is the inevitable reality of a program that continues to dominate its prey with relative ease.

“This was our number-one goal,” said Wood coach Steve Devlin, whose Vikings dispatched Archbishop Ryan by a misleadingly close 35-14. “If we aren’t successful here, we can’t reach our other goals.”

(See a photo gallery from the game.)

The last time Archbishop Wood lost a division game was in the 2007 final against West Catholic. Since then, the Vikes have captured seven straight AAA titles, 39 consecutive division wins and 14 straight playoff victories.

Their latest occurred in methodical fashion. Wood scored on each of its first four possessions to forge a 27-0 lead by halftime. On their first touch of the second half, star senior Jarrett McClenton returned a punt for another score. His ability to weave through would-be tacklers from left to right was breathtaking, and the subsequent, perfectly orchestrated two-point conversion toss from junior quarterback Anthony Russo to Christian Lohin was backbreaking because it increased the margin to 35-0 and thus, by rule, necessitated a running clock for the remainder of the contest.

“You never want to give up anything, but at that point we were pretty far ahead,” Bates said. “After they scored the second touchdown, it was time to buckle down and not let it become any closer.”

Bates was asked about Wood’s tepid reaction to winning the Catholic League championship.

“We definitely appreciate how important it is and how special it is to win this,” he said. “The Catholic League championship still means a lot to us. Some people think we take it for granted, but that is definitely not the case.

“One of the things we never do is take any team lightly. They have a lot of talent and a great playmaker. I know a lot of people talked about us winning easily but we didn’t listen to that. We respect Ryan.”

The playmaker that Bates referenced was senior Samir Bullock, the AAA Most Valuable Player. Stymied by a Wood defense that allowed only four touchdowns against AAA teams during the regular season, Bullock finished with 85 yards on 16 carries. Now with 1,890 rushing yards and 21 touchdowns, Bullock needs 110 more against George Washington’s staunch defense on Thanksgiving Day to reach the 2,000-yard plateau for the second straight season.

Wood also has a tremendous playmaker in McClenton. The senior tailback was given the championship game ball by an elated and appreciative Devlin, and for good reason. McClenton, who rarely discusses his burgeoning athletic resume, gained 125 yards on only 12 carries and he scored four touchdowns, three of them via the run. His performance elevated him to become Wood’s all-time leading rusher.

“I had a lot of help,” McClenton said. “My teammates always do a great job of blocking, and I just follow behind them.”

Bullock said that he, his teammates and coaches accepted responsibility for the defeat.

“We just didn’t play well; that’s the bottom line,” Bullock said. “Wood won because they just came to play. We did not play as a team, or as coach (Frank McArdle) would say, as ‘one.’ We left too many plays on the field and we just did not give 100 percent. We have a great group of guys but we were just not ready.”

Against the likes of Archbishop Wood, few teams are.