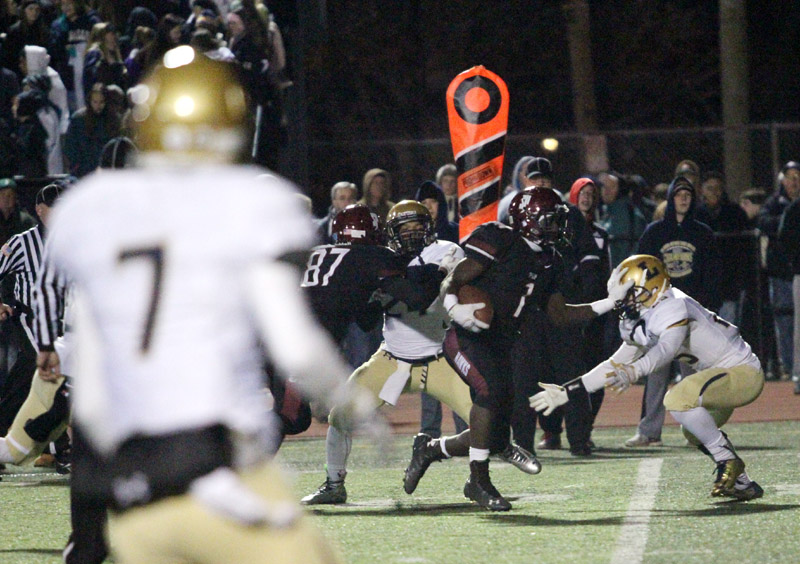 When two really good football teams prepare for battle, someone at some point will ponder the notion that if the opponents played each other 10 times, each would win five games.

That was the scuttlebutt before the Catholic League AAAA football championship Nov. 14 between St. Joseph’s Prep and La Salle at Northeast High School. The defending champion Hawks had defeated the Explorers, 35-31, during the regular season. Both teams had little trouble in the league semifinals; the Prep whipped Father Judge while La Salle did likewise to Roman Catholic.

Then the much-anticipated contest between the two longtime rivals began with La Salle seizing a 6-0 lead on a 63-yard punt return by Jimmy Herron. For the Explorers, it’s too bad the game didn’t just stop right there.

Outside of a hiccup in which Prep quarterback Jack Clements threw an interception that was returned for a touchdown by Herron, the Prep performed at an epic level, pillaging the Explorers in every facet possible en route to a 46-13 victory.

(See a photo gallery of the game.)

“People might be surprised at the score, but I had full confidence in my teammates, so something like this really doesn’t surprise me,” said senior Olamide Zaccheaus, who led all rushers with 146 yards and three touchdowns on only 12 carries. “We just kept working. Every single play had a life of its own.”

The Prep’s single-minded focus was best manifested late in the fourth quarter when the Explorers fumbled and, after a scrum, recovered the ball. Despite being ahead by 33 points, the Prep sideline was visibly and audibly miffed.

“We talked about playing hard for every single minute,” said Prep coach Gabe Infante. “No matter what the scoreboard said, we wanted to do our best on every opportunity.”

Considering how good a team La Salle is — and the Explorers (8-3) are very formidable — the Prep’s dominance was rather startling. On offense, the Hawks did whatever they wanted. With 2:42 remaining in the third quarter, the Prep had already scored six touchdowns — and that doesn’t include a 90-yard punt return score by sophomore D’Andre Swift that was called back by a ticky-tack holding call.

The Prep (7-3) would finish the scoring when Jim Bell (15 carries for a career-high 97 yards) picked up a nice block from fellow senior Joe Frio on the edge and raced 10 yards to the end zone.

When the game clock showed all zeroes, a seemingly endless drove of Prep fans excitedly raced down the steep steps near the end zone and sprinted toward midfield to join their heroic gridironers who had, for the second straight season, earned bragging rights for at least the next 12 months and who will now begin defense of their state championship reign.

Meanwhile, the subdued Explorers shook hands with their adversaries before standing along the sideline to salute their fans as the school alma mater played in the background.

The tears that flowed from La Salle safety Ryan Brady provided a vivid image, inadvertently representing many standout seniors now suddenly at the end of their scholastic football career because the Explorers did not schedule a Thanksgiving Day game.

To their credit, the Hawks were not basking in La Salle’s sorrow.

“You show respect for a team by how you prepare for them, and we prepared very well and very long before we played La Salle,” said senior Jon Daniel Runyan, a two-way lineman who had one of the six sacks that leveled overwhelmed La Salle quarterback Kyle Shurmur, who for the first time in his outstanding career did not throw a single touchdown pass and finished with a career-low 107 yards via 14 completions on 26 attempts. “They’re competitors, and losing never feels good. So you feel for them a little bit.”

During the post-game celebration that lasted more than 30 minutes, standout Hawks were everywhere. Senior defensive end Jake Strain harassed Shurmer all night with one sack and four blocked passes. League MVP John Reid was outstanding in the defensive secondary and on offense caught a touchdown pass.

Swift contributed 57 yards and two touchdowns rushing, one catch for 14 yards, and four kick returns for 129 more. Quarterback Clements, outside of the ill-advised pick-six heave, manned a smart, efficient outing (4-6 passing, 52 yards, one touchdown — his 19th of the year).

“This was a complete team effort,” Strain said. “We’ve been there before and we’ve played in some very big games the past two years. Every win feels great, but there’s still a lot of work to be done. So it’s onto the next challenge.”

NEXT: Shula’s lifetime commitment to Catholic education, other causes honored