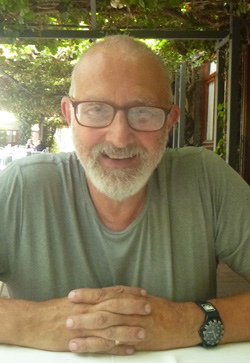 Born in Brooklyn, New York, he was a professor of communications for more than 30 years and was named professor emeritus from SUNY, Albany. For the past 10 years he has been a full professor at Neumann University in Aston.

He was ordained for the Diocese of Rockville Centre, N.Y., on May 26, 2001 by Bishop Emil C. Wcela and assigned to St. Frances de Chantal Parish, Wantagh, N.Y.

While teaching at Neumann with the permission of Bishop John Mansour of the Eparchy of St. Maron in Brooklyn he served at St. Sharbel Maronite Church in Newtown Square. Although still incardinated in the Diocese of Rockville Centre he was assigned to St. Agnes Parish in West Chester in January 2014.

“He was a kind, caring soul with a unique ability,” said Dr. Alfred Mueller, dean of arts and sciences at Neumann University. “He was an excellent teacher and I’ve had a number of his students e-mail me to say they would not be where they are without his guidance. He had this tremendous faith and tremendous belief in them.”

Dr. Joe Glass, an associate professor who worked alongside Deacon Lomonaco in communications, noted he was a man who never stopped learning. Deacon Lomonaco had three master’s degrees as well as his PhD.

“I don’t know if many of the students knew he was a deacon, but he had a unique blend of academic scholarship and ability to bring in the faith aspect, which was terrific. He was a bright guy, and a successful, caring individual.”

Deacon Lomonaco is survived by his wife, Lisa (nee Saggese), his daughter Juliana, 16 and son, Noel 13.

NEXT: Msgr. Menna, remembered as a selfless priest, dies at 84