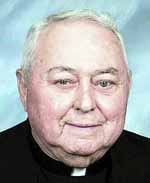 Born in Philadelphia, the son of the late Philip R. and the late Marie (Chobert) Barr, he attended St. Rose of Lima School, St. Callistus School and West Catholic High School. Although he received an appointment to the United States Naval Academy, he opted instead for the priesthood and entered St. Charles Borromeo Seminary.

He was ordained May 22, 1948 by Bishop J. Carroll McCormick at the Cathedral of SS. Peter and Paul and his first assignment was in hospital chaplaincy at the former All Saints Chapel, Philadelphia. In those early years he also assisted Father John Kavanaugh in the establishment of Chinese ministry at Holy Redeemer Chapel.

Through it all he found time for family. “Uncle Phil was always part of our life,” said his niece by marriage Carolyn Barr. “He did every baptism, every first communion, every wedding.”

Although her husband is also deceased, “they are together in heaven, I’m sure,” she said.

In 1979 Father Barr was appointed pastor of St. Edmond and he really found a home there until his 1995 retirement.

“We thought he was a wonderful man,” said Jean Marakowski, a long-time parishioner who attended his Dec. 3 funeral Mass at St. Edmond. “He loved this church and was proud of this church. He would always say he would be in the middle aisle here some day. He always boasted that it was the ‘Cathedral of South Philadelphia,’ and he was proud of the renovations he did to it. He was a good man who will be sorely missed.”

After his retirement Father Barr helped out at various churches and whenever possible he would go to Malvern Retreat House to hear confessions on Saturdays.

“Father Barr was very kind, a compassionate guy,” said Jim Fitzsimmons, the president of Malvern. “People loved him in confession and it was a blessing to have him.”

“When he was here at St. Edmond the school was open and he had the responsibility of administering a parish and a school,” Father Kelley said. “At the time he left he looked like he was 94. He returned a few weeks later and looked like he was 64. I said, ‘Phil, I envy you, you look like a million bucks.’ He lived a good life, he enjoyed his family and friends and nothing can be better than that.”

Father Barr is survived by his brothers, D. Robert Barr and F. Donald Barr, and many nieces and nephews.

NEXT: Deacon and communications professor dies at age 66