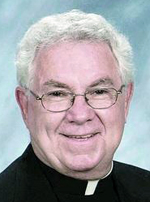 Father George B. Moore, 76, pastor emeritus of St. Benedict Parish in Philadelphia, where he joyfully ministered for 35 years, died Dec. 19.

He was ordained May 21, 1966 by Archbishop John Krol at the Cathedral of SS. Peter and Paul. His early assignments were as parochial vicar at St. Timothy, Philadelphia; St. Mark, Bristol; St. Raymond of Penafort, Philadelphia and St. Ignatius of Loyola, Philadelphia.

When he was appointed pastor of St. Benedict in 1978 he was the youngest pastor in the archdiocese and remained there until he was named pastor emeritus in 2013, at which time the parish merged with St. Athanasius Parish.

A Reception of the Body liturgy was celebrated Monday, Dec. 29 at St. Benedict Church followed by a viewing and a Mass.

Msgr. Richard Youtz of the Harrisburg Diocese, who preached at Father Moore’s funeral Mass, was a seminarian with him at St. Charles and the two of them became best friends.

They served their “Thursday Apostolate” as seminarians together at Most Precious Blood Parish in Philadelphia, where he got his first taste of ministry in the African American community, which really became his life’s work.

Msgr. Youtz recalls at Father Moore’s first Mass in the program there was written a quotation: “Every priest because he is a priest has dedicated his life to the work of universal salvation. If he is conscious of the dignity of his office he should no longer live for himself but for the world following the example of Him whom he represents.”

Father Moore was a died in the wool, win or lose Phillies and Eagles fan, and on vacation the two priests traveled the country visiting the various ballparks.

Father Moore was a simple man, usually wearing an old sweater, regardless of the nice gifts his friends and family would give him that are still in the closet with the tags on them.

“He was truly a good shepherd, and his family was whomever he was with,” said his cousin Nancy Lancaster. “He was our leader, the one in the family who would say, ‘Let’s play cards’ or ‘Let’s play baseball,’ and he would make up the rules of whatever we were doing.”

“The people thought he could walk on water,” said Theodore Travis Jr., a 50-year member of St. Benedict’s.

“He was very inviting for a person to enter the faith and embrace it thoroughly. He would say, ‘Do the best you can, you are doing it for God.’ He would show by example; he was a true disciple who went out and made disciples, and he wanted you to use your gifts.”

Father Moore is also survived by his sister-in-law, Gail Moore, and nieces, nephews and cousins.

NEXT: Deacon Kretsch dies at 88, after years serving in Norristown area