Deacon Kretsch dies at 88, after years serving in Norristown area 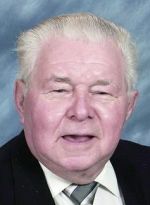 Deacon Donald J. Kretsch, a retired permanent deacon of the Archdiocese of Philadelphia and a resident of Jeffersonville, Montgomery County, died Dec. 20 after a brief illness. He was 88.

Deacon Kretsch was the son of the late Roman J. Kretsch and Viola Scheman of New Ulm, Minn. He served in the U.S. Merchant Marines for a year before he married Mary Romano in 1946, and they were married for 68 years. He worked for B.F. Goodrich and retired in the early 1990s.

Deacon Kretsch was ordained a permanent deacon on June 5, 1994 at the Cathedral Basilica of SS. Peter and Paul by Bishop Edward P. Cullen. He was assigned to Holy Saviour Parish in Norristown, where he served until his retirement in 2004.

Following retirement, Deacon Kretsch assisted at St. Helena Parish in Blue Bell for 10 years. He was very involved in many works of charity during his entire ministry as a deacon.

He enjoyed the privilege of meeting and praying with Blessed Teresa of Kolkata while visiting the Missionaries of Charity in Norristown.

Deacon Kretsch enjoyed golfing, hunting, spending time with his extended family and friends, his prayer group and service to the church.

Interment was at St. Patrick’s Cemetery in East Norriton.

NEXT: Franciscan sister, a teacher for 57 years, dies