Confession is time to encounter God, it’s not a dry cleaners, pope says 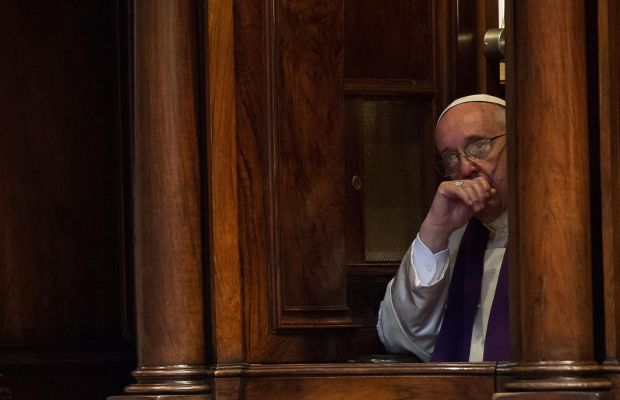 VATICAN CITY (CNS) — While people must be honest and specific about their sins when they go to confession, they will miss the sacrament’s key grace if they are “completely mechanical” about listing their sins, Pope Francis said.

Confession is not a time for judgment, but for an encounter with the merciful God who is always ready to forgive those who seek pardon, the pope said Jan. 23 during Mass in the chapel of his residence, the Domus Sanctae Marthae.

“So many times, confessions seem like routine, a formality,” he said. “Blah, blah, blah. Completely mechanical!”

“Where is the encounter” in that kind of confession, the pope asked, “the encounter with the Lord who reconciles, embraces you and celebrates? That is our good God.”

According to Vatican Radio, Pope Francis said parents, priests and catechists need to teach people how to “confess well, because going to confession is not like going to the dry cleaners to have a stain removed. No! It is going to meet the Father, who reconciles, forgives and celebrates” the return of the sinner.

“Even if you have lived a life of many sins, of many ugly things, but in the end you are a bit repentant, ask forgiveness,” Pope Francis said. “He will forgive you immediately. He always forgives.”

People often think that they must somehow buy God’s forgiveness, he said. But that is not true. “You don’t have to pay anything” because “Christ has paid the price for us.”

“There is no sin that he won’t forgive,” the pope said. Like the father in the parable of the Prodigal Son, he said, most of the time God will not even let you finish saying how sorry you are before he embraces you and forgives you.

PREVIOUS: A call to bury the 40-minute eulogy