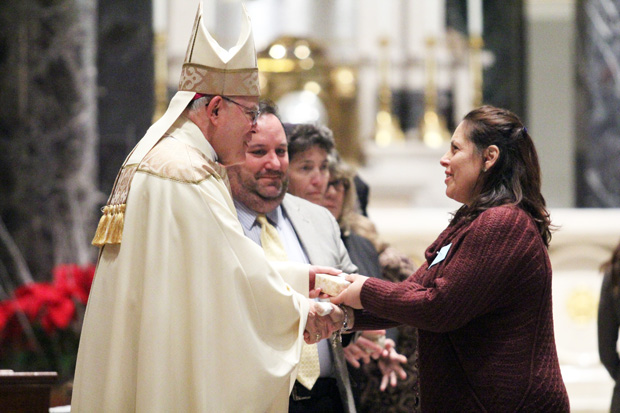 Maria Evans receives the Our Lady of Gaudalupe medal, signifying her 15 years' service as a catechist, from Archbishop Charles Chaput Jan. 10 at the Cathedral Basilica of SS. Peter and Paul. Christopher Mominey (center), secretary for Catholic education in the Archdiocese of Philadelphia, watches. (Photo by Sarah Webb)

Approximately 200 women and men who represent the literally thousands of catechists who quietly serve as volunteers in parish religious education programs around the Archdiocese of Philadelphia were honored for their years of service at the annual Mass and Award Ceremony for Parish Religious Education Programs held at the Cathedral Basilica of SS. Peter and Paul on Saturday, Jan. 10.

(See a photo gallery of images from the Mass here.)

Also honored were several directors of religious education who have served for milestone numbers of years. Archbishop Charles J. Chaput, who was principal celebrant, homilist and presenter for the event was given the highest award granted by the Office for Catechetical Formation, the 2015 Pope Paul VI Award.

In his homily Archbishop Chaput thanked the catechists for all they do, and took note of the Jan. 11 celebration of the solemnity of the Baptism of the Lord and the duty of everyone, because of their baptism, to be evangelizers.

Orthodoxy “shouldn’t be seen as a negative word,” he said. “It doesn’t mean you are old-fashioned, it means you are faithful to the teachings of Jesus Christ.”

During the award ceremony the John Neumann Award was given to catechists for five years’ service; the St. Pius X Award for 10 years; the Our Lady of Guadalupe Award for 15 years, the St. Martin de Porres Award for 20 years; the St. Charles Borromeo Award for 25 years, and the St. John Paul II Award for 30 years.

DREs were recognized through the St. Katharine Drexel Award, the St. Elizabeth Ann Seton Award and the Queen of Family Award for 10, 20 and 25 years of service respectively.

Chris Mominey, archdiocesan secretary for Catholic education, told the catechists, “The work that you do is no less important than the work of your colleagues in the Catholic schools. Thank you for the being witnesses, disciples and examples our young people need in these challenging times.”

Nance Morrisroe, who received the Queen of Family Award for 25 years as DRE at St. Teresa of Avila Parish in Norristown, said hers has been “a wonderful, wonderful ride, full of joy and blessing. I’m grateful for all of the catechists who have worked with me over the years.”

Immaculate Heart Sister Barbara Jude Gentry, who is DRE at SS. Simon and Jude Parish in West Chester and president for the local association for DREs, thought the ceremony was especially appropriate as the archdiocese anticipates the World Meeting of Families in September.

“The work is very important,” she said. “The family is where it begins and we work with parents.”

Julie Clymer, a DRE at St. Maria Goretti Parish in Hatfield, who received the St. Katharine Drexel Award, said religious education is “essential for the people that come at night. We have over 70 volunteers in the parish in various programs to bring the Lord to kids.”

Jackie Badey, a 30-year catechist who received the St. John Paul II Award, has taught at the former St. Clement Parish in Philadelphia, the former St. Margaret Mary Alacoque Parish in Essington and now at St. Gabriel, Norwood. “I want the kids to know who God is and who Jesus is and he is there for them,” she said.

Ann Menna, the archdiocesan deputy secretary for catechetical formation and archdiocesan director for parish elementary religious education, has helped plan the annual Mass for years. For her the work of the catechists and DREs “is proof that the archdiocese is alive and well and the faith is alive and well,” she said. “These are the people who are bringing the faith to a new generation and they are doing it enthusiastically. The Lord is smiling.”

PREVIOUS: Delco parish marks an end and a beginning

NEXT: Students: Make a video for World Meeting of Families