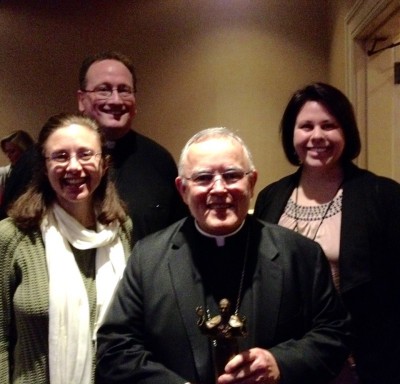 With Archbishop Charles Chaput (front center) as he accepted an award from FOCUS at its national conference Jan. 2 in Nashville are, from left, Beth Riordan, director of Youth and Young Adult Ministry in the Philadelphia Archdiocese; Father Steve DeLacy, director of vocations to the diocesan priesthood; and Maria Parker, youth minister at St. John the Evangelist Parish in Yardley.

He was attending SEEK 2015, the five-day national conference for FOCUS that drew nearly 10,000 attendees, most of them college students. (Learn more about FOCUS here.)

According to the group, the archbishop “has played an instrumental role in FOCUS’ founding and expansion to 100 campuses nationwide,” including Temple University in Philadelphia. The award “honors Catholics who, by their demonstrated commitment and witness, inspire others to the universal call to holiness and the renewal of humanity.”

The archbishop also celebrated Mass for the convention attendees the following day, Jan. 3. Watch his homily below:

Watch the award video for the archbishop below:

PREVIOUS: With some polish, St. Rita Shrine shines in its next century