Marchers from archdiocese show their pro-life colors in Washington 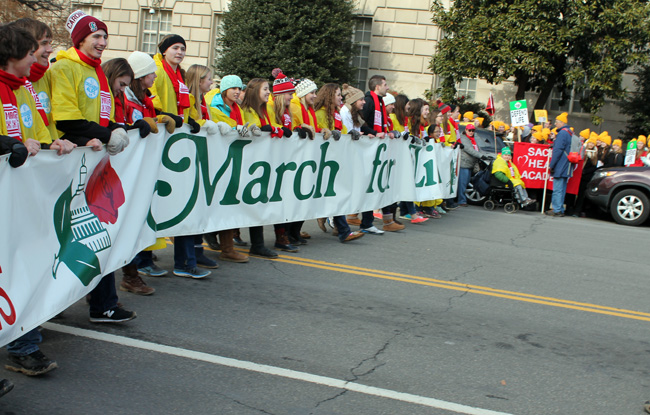 Young people get behind the pro-life banner -- literally and figuratively -- in the cause of promoting the sanctity of life, in a scene from the 2015 March for Life.

To the amazement of many observers, the annual Jan. 22 March for Life in Washington simply continues to go on and if anything grow, despite minimal coverage from a generally hostile secular press.

This year was no different, and for many Philadelphians the kickoff was the 10 a.m. Mass at the Basilica of the National Shrine of the Immaculate Conception with Archbishop Charles Chaput as the principal celebrant.

(See a photo gallery of scenes from the march.)

“We are not here for ourselves, we are here for others, thinking of the unborn children whose lives we hope to protect by our efforts today,” Archbishop Chaput told his mostly youthful congregation. “To be a Christian means to be a woman or man for others. Your efforts today are very, very pleasing to Jesus.”

Although many in the basilica were from dioceses around the country, there were many from the Philadelphia area including a contingent of 44 students from Merion Mercy Academy, who were in the left-side front pews as they are most years. 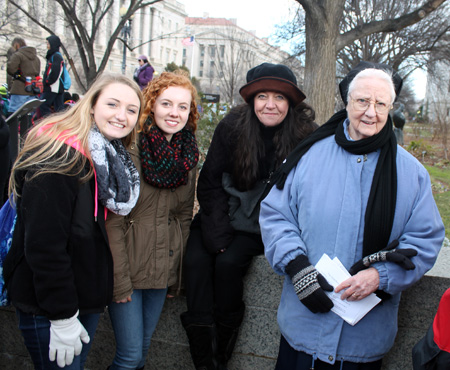 They get these seats almost every year in the packed basilica because not only do they come early, but as Kate Devlieger, the co-president of the school’s pro-life group explained, “Most people when they come in sit toward the back. We go right up front and there are seats.”

As to why she personally comes, Devlieger said, “It’s definitely an issue I’ve always been passionate about and I wanted to be with people who have the same values as I have.”

Although there were many Philadelphians at the basilica, many others arrived that morning and went straight to the pro-life rally on the National Mall, or waited on the street until the march began and just joined the crowd.

Lansdale was doubly represented, first by students from Lansdale Catholic. Mary Clare Rae, a senior, observed the march “is fun and it’s really inspiring to see so many people come out to support life.”

Another group was representing St. Stanislaus Parish in Lansdale, including Jean Marie Motley. “We have 20 here,” she said. “We come to witness for life and against abortion.”

As always there was a large contingent from St. Charles Borromeo Seminary, led by Bishop Timothy Senior, the seminary rector.

“One of the things that impresses me each year is the energy of the march which is overwhelmingly young people,” Bishop Senior said. “They are embracing the truth of the sanctity of life and doing it with courage. Our young men in the seminary themselves are being inspired by this and encouraged in their call to the priesthood.”

One Philadelphia seminarian, Deacon Kevin Mulligan who was at the march, actually came down from St. John XXIII Seminary in Weston, Mass. That seminary specializes in priestly formation for older seminarians, and he and Deacon James Cardosi, also at St. John XXIII, will be ordained priests for Philadelphia this May.

“This is my 11th year total at the march, my fourth as a seminarian,” Deacon Mulligan said.

A once and future priest for Philadelphia at the March was Father Joseph Coffey, currently a lieutenant commander and chaplain for the U.S. Navy stationed on the aircraft carrier George Washington based at Yokosuko, Japan. He was actually at the march representing Liferunners.org, a national group that combines a love of running with a commitment to pro-life issues.

Father Coffey, whose mother, Roseanita Coffey, died earlier this month, said, “My mother was the one who introduced me to the march. I’ve been coming since the 1970s.”

Immaculate Heart Sister Regina Bernardo, whose day job is in the library at Bishop Shanahan High School in Downingtown, has been attending the march for about 20 years. Who she comes with depends on where she is living, and over the years it has been parishioners of St. Joseph Parish in Downingtown, St. Pius X in Broomall, St Dorothy in Drexel Hill and now St. Agnes in West Chester. “I come to defend life,” she declared.

Most parishes bring a busload down to Washington. St. Andrew Parish in Newtown is a big parish that also thinks big.

“We have about 100 people on two buses, because we are a very pro-life parish and we follow the lead of our pastor, Father Michael Picard,” said Father Jason Buck, who is brand new to the priesthood and parish this past year.

Young, old or middle-aged, the Philadelphia Archdiocese is definitely pro-life.

PREVIOUS: 71 buses ready to head for Washington and March for Life

NEXT: Festival brings teens to their feet, and deep into their hearts, at St. Cyril’s