71 buses ready to head for Washington and March for Life 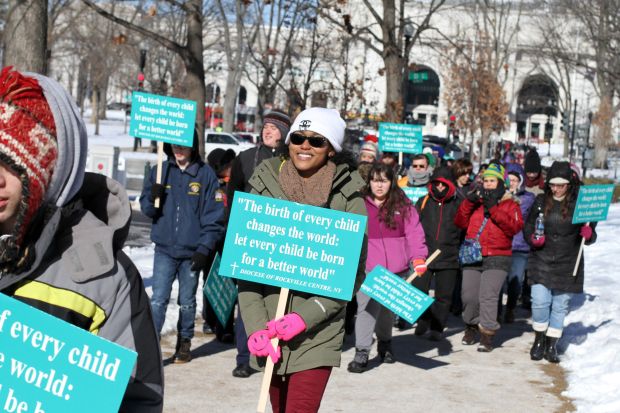 Participants in last year's March for Life braved bitter cold and snow in Washington, D.C. The weather for this year looks to be much milder, with mostly sunny skies and the high temperature at 45 degrees. (CNS photo/Gregory A. Shemitz, Long Island Catholic) 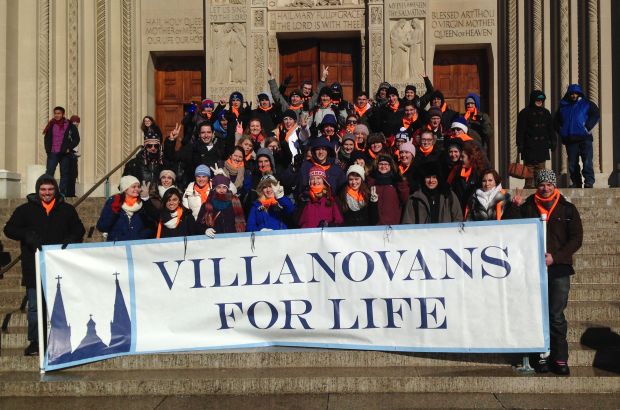 A group from Villanova University poses for a photo last year before traveling from the Basilica of the National Shrine of the Immaculate Conception, to the Washington Monument and on to the U.S. Supreme Court building.

The marchers go anyway every year because it is the anniversary of the 1973 Roe v. Wade U.S. Supreme Court decision that mandated legal abortion throughout the land. They are definitely not fair-weather friends of the pro-life movement, but ardent stalwarts.

Thousands of Catholics throughout the Archdiocese of Philadelphia will rise at dawn, board buses sponsored by parishes, high schools and colleges and head for the nation’s capital to witness to their conviction that life begins at conception and unborn babies have the same God-given right to life as those who have been born.

On the evening before the march a Vigil for Life at Washington’s Basilica of the National Shine of the Immaculate Conception will be preceded by a 6:30 p.m. opening Mass with Cardinal Sean O’Malley, chairman of the United States Conference of Catholic Bishops’ Committee for Pro-Life Activities, as the principal celebrant.

The next morning Archbishop Charles Chaput will be the principal celebrant and homilist at a 10 a.m. Mass at the Basilica for pilgrims from the Philadelphia area.

The rally itself will be held on the National Mall near the Washington Monument and will feature members of Congress and prominent figures in the pro-life movement.

Philadelphia participants are asked to gather at Constitution Avenue and Sixth Street where the archdiocesan banner will be held by St. Charles Borromeo seminarians, although it is usually a challenge finding anyone in so large a crowd.

The March for Life itself is scheduled to begin at noon and will proceed down Constitution Avenue toward the Supreme Court building where it ends.

Steven Bozza, director of the archdiocesan Office for Life and Family, which coordinates pro-life activities in the area, traveled to Washington early to participate in events that surround the annual rally and march.

“For me the highlight is the people, they are so excited,” he said. “Our movement is growing, especially with young, enthusiastic people. We are winning the battle. You may not see it but abortion clinics are closing and the number of abortions is down.”

At last count there were 71 buses registered with the archdiocese as traveling to Washington, totaling about 2,000 people.

Perhaps typical of the parish groups is that of St. Dominic Parish in Northeast Philadelphia. They are relative newcomers as a group as they trace back to 2002, but group leader Susan Silcox started going in 1984.

“We go because we want to witness for the sanctity of life and let our voices be heard,” she said.

Others, including a number of college groups, are not listed in the archdiocesan bus count because they made all their own arrangements.

Then there are those who travel by car, including a group from Holy Redeemer Chinese Catholic Church.

“We are just a small group,” said Capuchin Franciscan Father Thomas Betz, the group leader. “We will attend an 11 a.m. special Capuchin Mass in the National Shrine crypt before the march,” he said. 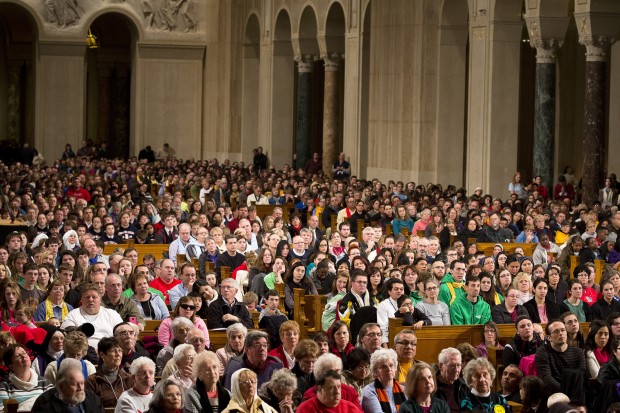 People pack the Basilica of the National Shrine of the Immaculate Conception during the opening Mass of the National Prayer Vigil for Life in Washington Jan. 21, 2014. The all-night vigil is held before the annual March for Life. (CNS photo/Tyler Orsburn)

PREVIOUS: Catholic Charities Appeal launches with aim to give hope

NEXT: Marchers from archdiocese show their pro-life colors in Washington