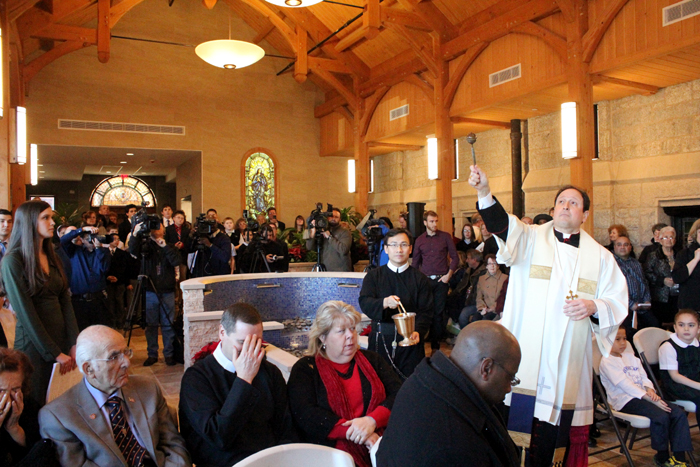 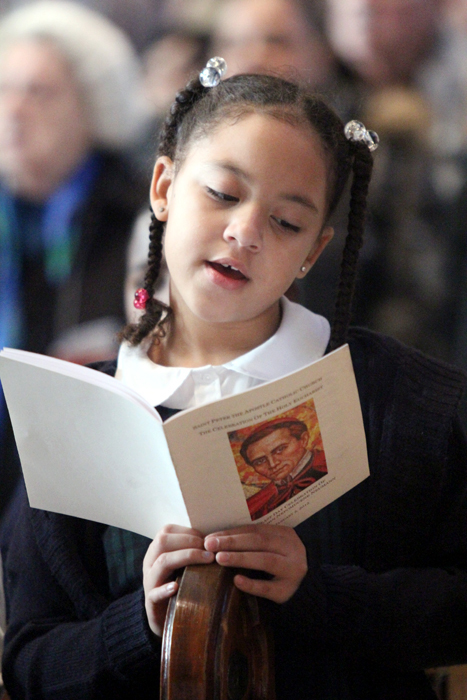 It was almost a throwback to the 1940s. Imagine a beautifully decorated church, literally overflowing with worshipers; the little children of the parish school jammed 16 to a pew in the first 11 rows on the Blessed Mother side, every one of them, from the tiniest child, perfectly behaved during a long liturgy that included a flawless combined choir of young voices adding to the grandeur of the Mass.

This was the Jan. 6 feast day Mass for St. John Neumann, fourth Bishop of Philadelphia, at St. Peter the Apostle Church in Philadelphia.

(See a photo gallery with 25 images from the Mass.)

Auxiliary Bishop of Philadelphia John McIntyre was the principal celebrant and homilist of the Mass, with more than 20 priests assisting, mostly Redemptorists like St. John Neumann himself. Among other notable concelebrants was Archbishop Emeritus Edward Gilbert of Port of Spain, Trinidad and Tobago, who was the Redemptorist provincial before he was named bishop.

St. John Neumann (1811-1860) studied for the priesthood in his native Bohemia, emigrated to America and was ordained for the diocese of New York in 1836. In 1840, desiring to work among fellow Germanic immigrants, with the permission of his bishop he entered the Congregation of the Holy Redeemer (Redemptorists), a congregation that was especially successful in that ministry.

At the time of his appointment as Bishop of Philadelphia in 1852 he was ministering in Baltimore and had the reputation of being a holy and capable priest, a reputation that was further enhanced during his short eight years as bishop before his sudden death in 1860.

St. Peter the Apostle Church, then as now was ministered by the Redemptorists, and other Redemptorists were already buried beneath the church.

It was Bishop Neumann’s wish that he be buried among them, which is why to this day the lower level of the church is a shrine dedicated to Philadelphia’s first canonized saint.

During the process leading to his 1977 canonization his remains were exhumed and placed within what is essentially an effigy in a glass coffin under the shrine altar for veneration by the faithful.

“My brothers and sisters,” he said, “there is no more fitting manner in which to commemorate the life and ministry and ask the intercession of this holy and exemplary priest, missionary, Redemptorist, bishop and lover of God and mankind than for us to imitate the virtues that he lived so completely, so heroically and extraordinarily.”

The entire celebration, although an annual observance, had something of an aspect of an event leading up to the upcoming World Meeting of Families. Archbishop Vincenzo Paglia from the Pontifical Council for the Family had been scheduled to concelebrate the Mass but his trip to the U.S. from Rome as part of a planning meeting for the congress was cancelled.

Nevertheless, Philadelphia Mayor Michael Nutter did attend ceremonies after the Mass for the dedication of a new atrium that has been added to the shrine and will be perfect for gathering ceremonies and other small events.

“We are thrilled that Pope Francis, who is one of the world’s most transformational leaders, will come to the City of Brotherly Love and Sisterly Affection for the World Meeting of Families,” the mayor said. “Pope Francis continues to be that voice for those who are often overlooked, and St. John Neumann helped Philadelphia to live up to its name.”

St. Peter’s was an immigrant parish when it was founded and it still is today. But now there are families from many countries, not just Germans, Bohemians and Austrians. As a reference to these many immigrant ties, school children from St. Peter School placed small flags representing their nationalities in the time capsule. The little saint from Bohemia must be delighted.

At the end of the day many of the people who came to the shrine and the church on Jan. 6 were not there primarily because of the World Meeting of Families or for an atrium blessing.

They were there for the same reason people have been visiting for 155 years. They wished to celebrate, venerate and petition St. John Neumann. It’s that simple.

“I love St. John Neumann and I always pray to him,” said Joanne Logan, who was in town from St. Joseph Parish, Downingtown. “He always comes through for me.”