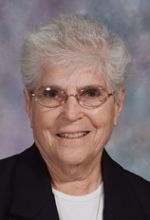 Sister Charlotte Lagnese, O.S.F. (formerly Sister Marguerite Mary), died Jan. 13 in Lancaster General Hospital. She was 79, and had been a professed member of the Sisters of St. Francis of Philadelphia for 57 years.

Sister Charlotte was born in Baltimore, Md., where she was a member of St. Katharine Parish and a graduate of the Catholic High School of Baltimore. She entered the congregation in 1956 and professed her first vows in 1958. She earned a B.A. in humanities from Neumann University and an M.A. in theology from La Salle University. She ministered primarily in education and in pastoral ministry.

The funeral Mass was celebrated Jan. 19 at Holy Trinity Church in Columbia, Pa. Burial was in Our Lady of Angels Cemetery, Aston.

Sister Charlotte is survived by two sisters, Dorothy Blackwell and Peggy Kline; a brother Michael Lagnese, nieces, nephews and by her Franciscan family. She is predeceased by her sisters Marie Gorub and Aileen Della Penna and her brother John Lagnese.

PREVIOUS: In retirement, priest ministered at nursing home before his death