In retirement, priest ministered at nursing home before his death 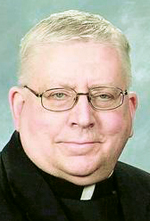 Born in Pottsville, the son of the late William F. and the late Mary (Schlitzer) Smith, he attended St. Ann School in Phoenixville and then traveled daily by train to Roman Catholic High School before entering St. Charles Borromeo Seminary.

He was ordained May 16, 1964 by Archbishop John J. Krol, and his first assignment was as parochial vicar at St. Mark Parish, Bristol. He also served at St. Edward the Confessor, Philadelphia; St. Therese of the Child Jesus, Philadelphia; Immaculate Conception, Jenkintown, Epiphany of Our Lord, Philadelphia and from 1985 until 2011 at St. Rose of Lima Parish, North Wales. In recent years his health declined and he retired to St. Mary Center for Rehabilitation and Healthcare in Lansdale.

“He was a great guy,” said Msgr. John P. Boland who was his pastor for much of his years at St. Rose of Lima. “He was dedicated to his priesthood, very good with the people, especially visiting the sick. He was very even-tempered, and didn’t complain.”

Even after he retired to St. Mary because of his own health issues, “he continued his own active apostolate among the other residents,” Msgr. Boland said.

At St. Rose, Father Smith, Msgr. Boland and Msgr. James Graham, a long-time resident priest and now the pastor, were a great combination, according to Dick Target, who with his wife Kathy became close friends with Father Smith.

“Father Gerry spent a great deal of his life caring for others, and it wasn’t for benefit of accolades,” Dick Target said. “His homilies were almost always about love — love of God, love of families, love of friends.

“He enjoyed going to the school, teaching the children their catechism, and on Halloween would be in full costume, maybe one year as a pumpkin, another as a pirate.”

His unofficial ministry at St. Mary Center was most striking, Target recalls, even to the point of sitting with a patient holding her hand through chemo sessions. “When he died, many of the nursing staff cried,” he said.

Father Smith is survived by his brother, Dennis W. (Louise) Smith, his nephew Charles Smith and his niece, Karen Smith-Silone. Interment was at St. John the Baptist Cemetery, Pottsville.

NEXT: Franciscan sister, active in education and pastoral ministry, dies