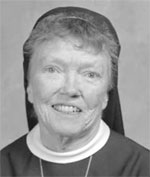 Sister Maria Manuel Collins, I.H.M., died in Jan. 6 in Camilla Hall, Immaculata, in the 65th year of her religious life. She was 84 years old.

Born in Philadelphia, Sister Maria entered the Congregation of the Sisters, Servants of the Immaculate Heart of Mary in 1949 from the former Our Lady of the Holy Souls Parish in Philadelphia, and professed her vows in 1950.

She taught in elementary and secondary schools in the Archdiocese of Philadelphia and the Dioceses of Allentown and Harrisburg. Sister Maria was assigned to Camilla Hall in 2004.

The funeral Mass was celebrated Jan. 12 at Camilla Hall. Father William E. Dean was the celebrant and homilist, and Msgr. Joseph Logrip was the concelebrant.

Sister Maria is survived by members of her religious community, her sisters Anna Dwyer, Eleanor (James) Flanagan, her sisters-in-law Helen (Thomas), Bette (William) and many loving nieces and nephews.

She was predeceased by her parents, John Joseph and Mathilda Brennan Collins, her brothers John (Ann), Francis, William, Edward, Thomas and her sisters Rita (Harry) Bartle, Regina and Veronica Collins, and her brother-in-law Paul Dwyer.

NEXT: In retirement, priest ministered at nursing home before his death