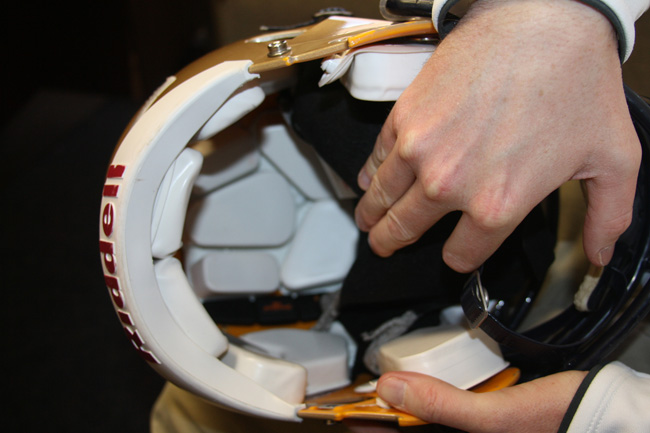 Dan Nelson, a certified athletic trainer at Bishop Heelan Catholic High School in Sioux City, Iowa, shows how Shockbox helmet sensors are attached to the inside of the crown of a football helmet with a piece of Velcro Dec. 8. (CNS photo/Joanne Fox, Catholic Globe)

SIOUX CITY, Iowa (CNS) — Micah Herbst of Sioux City does not have a son on the football team at Bishop Heelan Catholic High School.

But her quick eye — that caught a contest through her employer — resulted in the Sioux City school being one of 10 high schools in the country to receive free Shockbox helmet sensors for their football teams. The technology, according to the manufacturer, is designed to help coaches and parents better diagnose potential concussions.

Herbst, whose daughter Brooke is a 2013 Heelan alum and daughter Claire a current freshman there, learned about the contest, “Progress Is: Playing Smart,” through her employer, Progressive Insurance Co.

“Progressive, along with TakePart, teamed up to give 10 high schools the opportunity to win the Shockbox helmet sensors,” she said. “As an employee, I was not eligible to submit a story, but I could share the information with a school representative who could write the story.”

A written submission was to be completed reflecting on why the team was in need of the sensors and how they would have an impact on the football program.

Herbst knew Andy Foster, assistant activities director at Heelan, and shared the contest information with him.

“The procedure was to explain our submission in the contest’s drop box in August,” he told The Catholic Globe, newspaper of the Sioux City Diocese. “It could only be 500 characters in length.”

This was part of Foster’s submission to the contest:

“We’ve been blessed with a deep playoff run each year. Each year the players are getting bigger, faster and stronger. Along with a deep playoff run, there is the likelihood a concussion can occur, because it’s another game added to the schedule and because it’s another game against bigger, faster and stronger athletes. While form tackling is stressed and taught in our program, concussions still occur. Last year we treated over a dozen concussions within our football team. We are very happy to receive this technology to assist our concussion prevention efforts.”

In late October, the Crusaders received the notification the school was one of 10 winners to receive the 11 sensors, which retail for about $200 a piece.

“There’s only so much money in a sports budget,” Herbst noted. “When you can find other ways, like this contest, to secure something for a program, then that takes the burden off of fundraising.”

Concussions in football have made national headlines — including the recent suicide of Ohio State football player Kosta Karageorge, who disappeared after sending his parents a text message about his concussions — based on the increase among players and the long-term damage frequent concussions can cause.

According to Dan Nelson, Heelan’s certified athletic trainer, the sensors arrived with just two games left in the season. The impact sensors are attached to the inside of the crown of the helmet with a piece of Velcro.

Nearly a dozen Bishop Heelan players wore a helmet sensor, which sends instant wireless information to Nelson’s smartphone app about a player’s hits and if a head impact could result in a concussion.

“We had the quarterback, offensive and defensive linemen, receivers and running backs and linebackers wear them, because those are the positions that seem to take the most intense hits,” Nelson said. “Typically, once the sensor was in the helmet, it would stay in and not be switched out if that player was no longer in the game.”

The sensors show how many hits the player is taking, the intensity of the hits, and the direction from where the hit originated, such as side, front, back, Nelson explained.

“It can generate a tremendous amount of data,” he said. “It can even indicate if the person is delivering the hit or receiving the hit.”

What the sensor cannot do is diagnose a concussion, Nelson said.

“It’s one piece of the puzzle,” he said. “It does provide me with information so that I can quickly evaluate a player for symptoms of a concussion and determine whether or not to send him back into the game.”

Nelson reported the players were very interested in the sensors.

“It does provide an opportunity for us to educate the players on their game tactics, as well as their health,” he said. “It’s a nice addition to other things we do to keep the players safe.”

NEXT: Gwynedd’s win took 13 years, but don’t call it an upset