Gwynedd’s win took 13 years, but don’t call it an upset 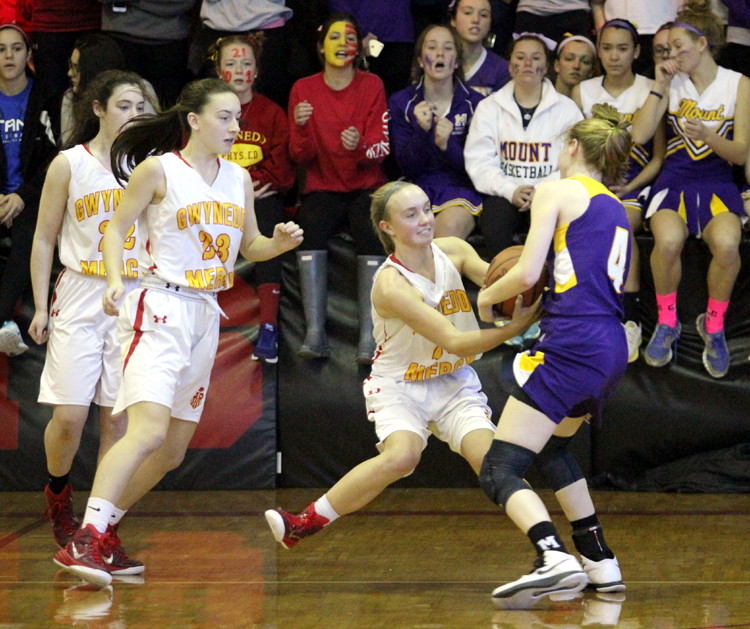 As players jumped off the bench and raced to center court to celebrate with the five starters, the red-and-gold-clad gymnasium seemed to almost shake with delight.

Behind them, the scoreboard told the tale. Gwynedd Mercy Academy had just defeated Mount St. Joseph’s Academy, 32-26, in a riveting Catholic Academies League tilt on Jan. 31 that helped explain why basketball coaches demand that their players work tirelessly and unselfishly when playing defense.

The reason? This was the first time GMA had defeated its nemesis in basketball since 2002.

Indeed, some wins feel better than others.

“This was a very emotional win for so many here at GMA, as evidenced by former players in attendance,” said Fasano. “We have had some close games (against Mount) in those years but we just couldn’t get it done.

“So watching that game unfold, I saw a different intensity from our players. What I was watching from this team was a ‘learning to win’ test.  For so many years we weren’t supposed to win. We may have gotten close, but we didn’t have the mental strength to battle back.”

Tenacious defense was the main reason.

“We had a lot of energy and we made it difficult for them to score,” said GMA coach Tom Lonergan. “That’s not a team you can afford to let up on. They are very talented.”

Lonergan was asked about a somewhat interesting observation. It appeared as though the GMA starters were obviously thrilled with a victory that placed them in a first-place tie with Mount in the very competitive Catholic Academies League, but they didn’t quite seem all that surprised, either.

In other words, while some might have viewed the triumph as an upset, the Monarch players did not.

“There’s a growing confidence,” Lonergan said. “I think they know that this is a special win, but I also know that they understand that there is a lot of basketball left this season and we don’t want to let up on our intensity.”

In many ways, the Monarchs’ victory over Mount symbolized a GMA overall emergence in athletic excellence. This past fall, the Monarchs captured the league championship in both tennis and cross-country, and finished runner-up in field hockey, soccer, and golf. All six of GMA’s sports teams appeared in the PIAA District 1 Class AA tournament, with both tennis and golf nabbing district titles while cross country, field hockey, and soccer placed second.

In the state tourney, the tennis team reached the semifinals, field hockey was eliminated in the quarterfinals, five players qualified in golf, and sophomore Stephanie Szekely placed 80th out of more than 300 cross country runners.

Individually, senior Nicole Catalino has committed to play field hockey at Division I Princeton; classmate Corinne Persichetti will do the same at Division I Fairfield. Junior field hockey stalwarts Ava Rosati and Megan DuVernois have already made verbal commitments to attend Penn and North Carolina, respectively.

“Our cultural has been changing,” Fasano said. “Our coaches are demanding more, raising the bar and holding teams accountable to each other and the programs. It’s been a difficult transition at times for our student-athletes to accept or understand ‘what it takes achieve at a higher level.’

“So many times you hear athletes say they ‘want to win,’ but when you ask in return, ‘What are you prepared to do for that want?’ the answers are sometimes hard to find.

“This is when success becomes contagious … and the ‘learning to win’ attitude starts to become a learned behavior. Now your players work harder to train their brains and muscles to compete consistently at any level. That’s where we find ourselves at Gwynedd Mercy Academy right now. More and more, our teams are competing in district and state tournaments. The number of D1, D2 and D3 student-athletes continuing their academic/athletic careers at the next levels has been increasing.”

Among those who appreciate GMA’s approach are star athletes Natalie Danze and Allie Szekely. Danze, a senior, finished as GMA’s all-time leading winner in tennis, and Szekely, a junior, has literally dominated the local swimming competition in record-setting fashion.

Danze labeled her GMA student-athlete experience as “something that has helped shape my entire life.”

“There is a lot expected of the athletes, but everything we do is always consistent with the school’s mission as being a Mercy school,” said Szekely. “That’s the driving force — to live a life of mercy and get the most out of our God-given gifts. It’s a great approach to high school athletics.”

Fasano, a 1980 Bishop McDevitt graduate, was a member of the Lancers team that defeated Archbishop Carroll for the 1979-80 Catholic League title. Among Fasano’s possessions is a piece of mesh that was snipped off during the traditional net-cutting ceremony.

Perhaps that helps explain why Fasano truly comprehends the scope of accomplishments such as GMA’s basketball win over Mount.

“As an athletic director, former coach and former high school student-athlete in the Catholic League, I absolutely identify with the big wins,” Fasano said. “When we played in the championship (at St. Joseph’s University), little Bishop McDevitt wasn’t supposed to beat the perennial power house in Carroll. I want that experience for all our student-athletes here. Being a student-athlete teaches you so many valuable life lessons that never end, no matter when the ‘athlete’ in all of us ends.”

Apparently, there’s a lot more being learned at Gwynedd Mercy Academy than just how to play sterling basketball.