Christian ID: You have to leave comforts of home to find it, pope says 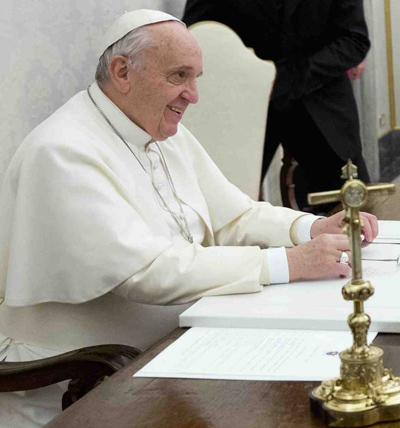 VATICAN CITY (CNS) — People will not find the face of God by relaxing at home on the couch, surfing online or reading encyclopedias, Pope Francis said.

Only people with a restless heart that thirsts for God will find him as they strike out on the road, taking risks and overcoming fatigue, danger and doubt, he said Feb. 10 during the morning Mass in the chapel of the Domus Sanctae Marthae where he lives.

Pope Francis focused his homily on the meaning of Christian identity and the right path to take to encounter God. He said the day’s two readings — from the Book of Genesis (1:20-2:4) and from the Gospel of Mark (7:1-13) — help Christians reflect on their identity, starting with “God created man in his image; in the divine image he created him.”

God’s image is found “certainly not on the computer, not in encyclopedias” because “there is no catalogue” with God’s image printed inside, he said.

The only way to get to know this image better, to understand one’s origins, “is to embark on a journey,” the pope said. And in order to go on that journey, it is necessary to have “that restlessness that God himself put in our heart and that carries you forward to seek him.”

However, journeying means “letting God and life put us to the test; embarking on a journey is to take risks” just like many prophets did, facing danger and experiencing hardship and doubt, he said.

The Gospel reading, in fact, talks about a false kind of journeying — a “quote ‘journey,’ a journey that doesn’t move, a motionless journey,” he said. In the reading, Jesus criticizes a group of Pharisees and scribes for clinging to human traditions and disregarding God’s commandment.

The pope said that “in the Gospel, Jesus encounters people who are afraid of embarking on a journey and who content themselves with a caricature of God. It’s a fake ID. These un-restless people silenced the restlessness in their heart, depicting God with commandments and forgetting about God,” believing the face of God was in the peaceful carrying out of the commandments.

God made humanity in his image, and in order to know what that is, the pope said, people have to “get moving and look for God.”

The pope asked that “the Lord give all of us the grace of courage to always embark on the journey in order to seek the face of the Lord, that face that one day we will see but that here on earth we have to go and seek.”

NEXT: Baptism: Opening the door to the Kingdom of God