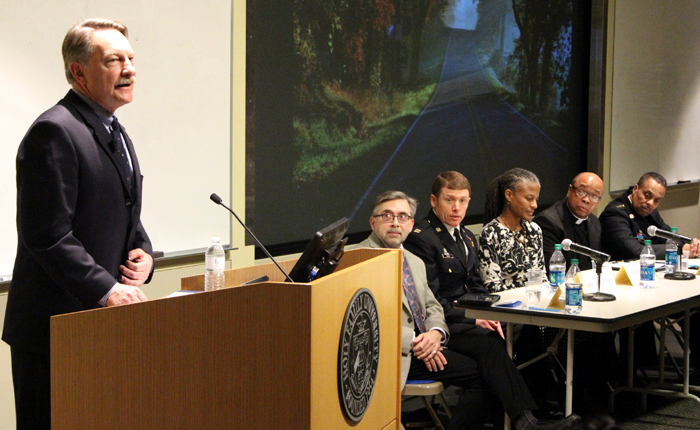 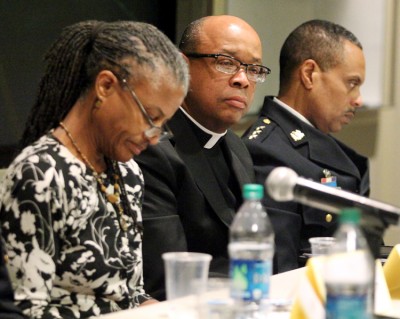 The killings of two black men in Ferguson, Missouri and New York City last summer, and the riots and protests that followed into the fall, brought America’s always-simmering racial tensions to a boil.

Reflecting on the current state of race relations and how to improve them was a panel of experts including a Catholic priest, police officers and college professors who joined a panel discussion Thursday, Jan. 29 titled “Life After Ferguson: Where Do We Go From Here?” at Holy Family University in Northeast Philadelphia.

(See a photo gallery from the event.)

The university’s diversity team sponsored the forum on the heels of Martin Luther King Day and in the hope that “constructive alliances” can be made between black people and white people, as they are “bound together in a single garment of destiny,” said Gloria Kersey-Matusiak, a Holy Family professor and lead organizer of the day, recalling Dr. King’s words in “Letter in a Birmingham Jail.”

More than 50 years after King wrote those words, the problem of violence, crime and the reaction to it by police officers remains a key source of racial tensions. But the panelists agreed that people’s sense of powerlessness leads to crime, and is itself rooted in poverty and joblessness.

Philadelphia Police Captain Michael Cram told the story of how in his 25th Police District in North Philadelphia, which has the highest crime rates in the city, officers organize a toy drive for neighborhood children each Christmas. He was struck by children’s requests for mattresses to sleep on and windows in their home.

Parents’ difficulty in finding a job to provide for their family “makes people feel powerless in those neighborhoods. They can’t feed their kids and they feel oppressed,” Cram said. “They can’t get a job and the corner is the only alternative,” meaning drug dealing. The economic issues, Cram said, “are what we should be rallying around.”

Cram said he and other city cops try to make connections with people in the poorest and most violent neighborhoods of the city by walking the streets and speaking with men on the corners and parents in their homes and in community centers.

“Ferguson is not the issue, walking kids to school is,” he said.

The most important thing for those parents is getting their children to school safely where they receive two good meals a day, so they want police to shut down a drug corner.

“Our officers have a good relationship with the guys in the neighborhood,  so when school is letting out we tell (the gang leaders) to get your guys off the corner,” Cram said. “We deal with them all the time.”

Listening to residents and walking the beat has become second nature to Cram, an Army Reserve veteran who did similar community-building work while on deployment in the war-torn streets of Iraq and Afghanistan.

It’s also a strategy that means a lot to Father Stephen Thorne, who as pastor of St. Martin de Porres Parish in North Philadelphia is a resident of the community where his parishioners live.

While he recognizes some black people and some police officers fear one another, he feels safe when he sees an officer walking the beat on Lehigh Avenue where his rectory is located.

He thinks more of that is needed, as are more opportunities for people to see and engage each other who otherwise would not do so.

“We need to build connections between people and police and build that intentionally. We need more of this, to have honest conversations and see a person as truly a human being,” Father Thorne said.

About 150 guests filled a Holy Family auditorium, about 50 of whom were university students. The panel they listened to included Father Thorne, Captain Cram and his superior on the police force, First Deputy Commissioner Richard Ross Jr., as well as Anita Foeman, communications professor at West Chester University; Delores Jones-Brown, professor at John Jay College of Criminal Justice; and Donald Brash, theology professor at Palmer Theological Seminary, the Protestant seminary at Eastern University in Radnor.

All the panelists praised the forum for bringing together people to listen and talk about race relations and building relationships among all peoples, something they said needed an intentional effort to be done more often.

They suggested that too often, conflicts erupt when people do not know one another and when they do not recognize their relationships with each other and with God.

“In Ferguson, if the officer and the young man had known one another, the outcome might have been different,” Foeman said.

“Every life is important, Father Thorne said. “Michael Brown and the officer’s lives — both are important.”

Confrontations between police officers and young black men ending in deadly violence are tragic but nothing new. What made last year’s incidents a cultural phenomenon that swept through the nation and raised issues of race and violence into a renewed national conversation was the use of social media.

The panelists panned mainstream media for sensationalizing the events. But it was Facebook, Twitter and other tools that spread word of the shootings widely in a person-to-person fashion.

When protests began springing up in cities all over the country, they were largely organized by people spreading the word through those same channels.

“Young people are engaging social media differently than older people,” Father Thorne said. “We need to bridge that gap. It’s a generational issue, and we need to understand the needs of young people.”

He added that it is important to bring together people who otherwise might not be able to meet, listen to and learn from one another, such as in the panel forum.

Deputy Commissioner Ross said the police department and others “need to be intentional on different ways of connecting on issues like this in the community.” But he and others noted that the young men they need to connect with may not willingly come to a community meeting.

“We need to reach the people we can’t reach,” and added the department will continue to use Twitter “to let people know what we do.” 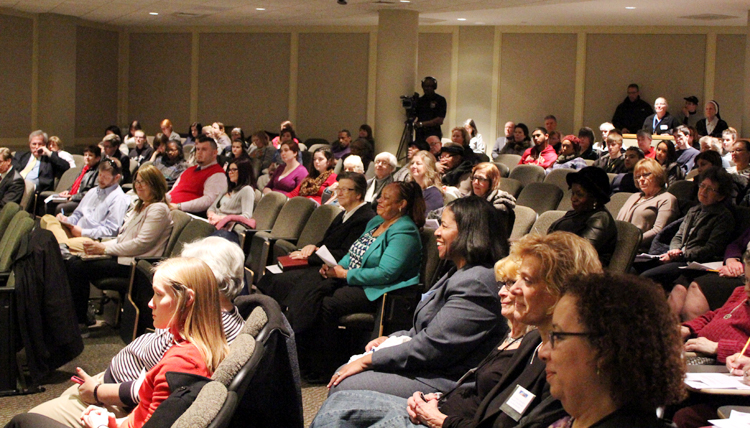 The audience of about 150 people enjoys the topic of discussion. (Sarah Webb)