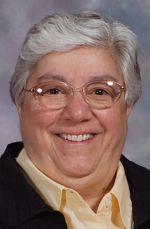 Born in Jersey City, N.J., she later moved to Union City and in 1959 she entered the Franciscan Sisters of Ringwood, a congregation that later merged with the Sisters of St. Francis of Philadelphia. She professed her first vows in 1961.

Sister Rosemary earned a B.S. from Seton Hall University and an M.A. from St. John University. She was also a certified addictions specialist and a certified alcohol and drug counselor. She ministered primarily in education, spiritual ministry, counseling and congregational ministry.

Sister Rosemary ministered in the Diocese of Paterson for 41 years. She taught at St. Francis School in Haskel and at Queen of Peace School in Hewitt, and later returned to Queen of Peace Parish as a spiritual director. She served at Our Lady of Lourdes Parish in Paterson, first as a director of religious education and later as principal.

She also ministered as a chaplain at the Straight and Narrow Home in Paterson. During her years in the Paterson Diocese, Sister Rosemary also served in congregational ministry for the Franciscan Sisters of Ringwood as novice director, treasurer and for many years as director of the Franciscan Spiritual Center.

Sister Rosemary’s eight years of ministry in the Diocese of Brooklyn included teaching at Holy Family School in Brooklyn.

She also ministered for five years in the Archdiocese of Newark. She served as principal of Assumption School in Emerson and as DRE at St. Vincent Parish in Bayonne. She also ministered at the Bergen County Drug and Alcohol Rehabilitation Center in Paramus.

Her funeral Mass will be at 11 a.m. Thursday, Feb. 5 in Assisi House, 600 Red Hill Road in Aston, Delaware County. Burial will be in Our Lady of Angels Cemetery in Aston.

Sister Rosemary is survived by her brother, Sam Napolitano, a niece, nephews and by her Franciscan family.