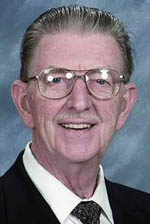 Deacon Mathieu M. Tielemans, a retired permanent deacon of the Archdiocese of Philadelphia, died Jan. 26. He was 87.

Deacon Tielemans was born in Antwerp, Belgium and married Paula Berghmans in 1952. He arrived in the United States in 1959, and after settling in Philadelphia, his wife arrived the following year. They were married for 62 years and raised three children.

He worked as a dental technician and was the owner and operator of CEKA Dental Attachments.

Deacon Tielemans was ordained a permanent deacon on May 24, 1987 by Auxiliary Bishop Martin N. Lohmuller at the Cathedral Basilica of SS. Peter and Paul, Philadelphia. He was assigned to St. Stanislaus Parish, Lansdale, and remained there throughout his ministry. He retired from active ministry on March 8, 2010.

Deacons Raymond C. Wellbank and Stephen C. Vondercrone served as deacons of the word and Eucharist, respectively. The master of ceremonies was Deacon Charles G. Lewis.

Deacon Tielemans is survived by his wife Paula, children Albert (Amy), Christina Willett (George) and Eric (Dana), as well as seven grandchildren. He was preceded in death by his brother Francois Tielemans and sister Julienne Leonardo.

NEXT: Franciscan sister who was certified addictions counselor dies