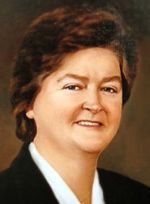 Sister Clare Carty, O.S.F. (formerly Sister St. Clare), 78, died Feb. 14 in Chester-Crozier Hospital. She had been a professed member of the Sisters of St. Francis of Philadelphia for 58 years.

Sister Clare was born in Philadelphia where she was a member of St. Francis Xavier Parish and a graduate of Hallahan High School. She entered the congregation in 1955 and professed her first vows in 1957.

She earned a B.S. in English from Mount St. Mary University in Emmitsburg, Md.; an M.S. in guidance and counseling from Loyola University in Baltimore; an MHA in hospital administration from George Washington University in Washington, D.C.; and an honorary doctoral degree from Bucks County Community College for her work in public service.  She ministered primarily in education and in health care.

Sister Clare received numerous awards for her work. In 1986 she received the Woman of Distinction Award from Soroptimist International of Indian Rock and in 1994 was named Citizen of the Year by the Lower Bucks County Chapter of the American Red Cross. She received the Woman of the Year Award from the Bucks County Council of Boy Scouts of America in 1997 and in 2014 was inducted into the Hallahan High School Hall of Fame.

Sister Clare ministered for 32 years in the Archdiocese of Philadelphia. In 1980 she began working as assistant administrator of St. Mary Hospital in Langhorne and in 1982 became administrator and CEO of the facility, a position she held until 1999. Under her leadership St. Mary’s grew from a hospital to a medical center and trauma center.

During that period she also served in congregational ministry as a member of the provincial council for the former Immaculate Conception Province. From 1999-2002 she served as vice-president of the continuum of care for Catholic Health Initiatives and from 2003-2007 as administrator of Congregational Services for the Sisters of St. Francis. She volunteered for the Sisters of St. Francis Foundation from 2008-2012.

In 2012 Sister Clare moved to Assisi House in Aston where she served in prayer ministry until her death.

Sister Clare is survived by her brother, Thomas Carty, sister-in-law Agnes Carty, nieces and nephews, and by her Franciscan family.