Growing the faith and selling all the tea in China 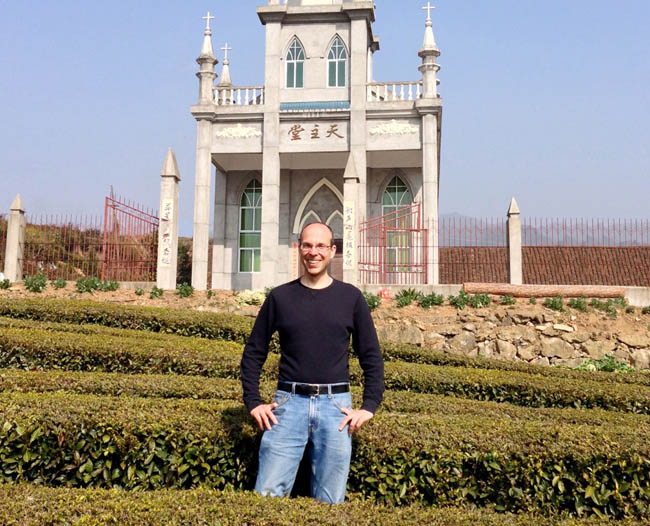 John Smagula, who worships at Holy Redeemer Catholic Church when he is in Philadelphia, stands in front of a Catholic church in the Yichang Diocese of Central China. 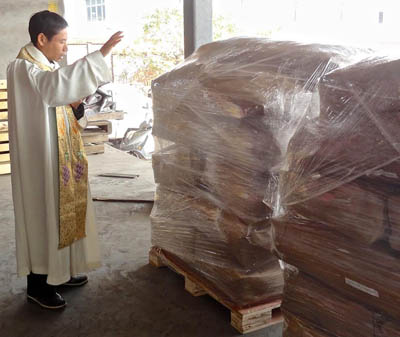 Father Zhu Daihua blesses a shipment of tea from the Three Gorges area of Central China, the product of the Crossings Tea Company set up by Philadelphian John Smagula.

John Smagula, an associate professor and director of Asian Programs for Temple University, spends most of his time in China, based mostly in Beijing. He developed and still implements Temple’s curriculum for Legal English and Legal Reasoning for Chinese and other international law students.

That’s his day job. His heart is really in the remote Three Gorges area of Central China where he works with Father Li Xiaoguo, the vicar general of Yichang Diocese (it hasn’t had a bishop in some years), in programs to support the tiny Catholic community in the area.

Smagula is originally from Guilford, Conn., where his interest in China was first kindled in 1984 through one of his teachers at Notre Dame High School, West Haven, who had recently returned from a trip to China.

“Looking back, it was the hand of God,” he said.

His first trip to China was in 1991 as a junior in college when he went for a year to study Chinese at Nanjing University. After college and law school he worked on Wall Street for three years, but his heart wasn’t in it.

“I had the desire to do something real; the superficial lifestyle I was living didn’t fulfill my needs. I was searching for my calling,” said Smagula, who on his trips back to Philadelphia and Temple University usually worships at Holy Redeemer Chinese Catholic Church on Vine Street.

Most of his time is spent in China, where his work also involves extensive travel. And that’s how he stumbled upon the Three Gorges area, best known for the humongous dam the Chinese government built as a huge source of electrical power and also its beautiful scenery.

But it is also an area with little industry. The farmers are quite poor, including Catholic farmers, and a major crop is tea.

The church was first introduced to the region by Belgian Franciscan priests, but of course all missionaries were expelled with the coming of communism in 1949, and many former churches are in ruins and church-state relations remain extremely touchy to this day.

The problem was how to help the poor Catholic tea farmers so they would stay in the area and grow the church rather than leave for the more prosperous cities.

Smagula and Father Li hit upon the idea of forming a company for exporting tea to the United States.

Through the newly formed Crossings Tea Company, tea could be purchased from the local farmers and, after processing and packaging, shipped to the U.S. for sale with profits used to assist the church in the Three Gorges area.

Although China is the largest tea producer in the world, most is for home consumption rather than export. Tea was first cultivated there more than a thousand years ago, but it was not introduced to Europe until the coming of Portuguese missionaries and merchants in the 16th century. It wasn’t until the 19th century that Great Britain broke the Chinese monopoly by planting tea elsewhere in Asia.

It was actually Chinese tea that was dumped in Boston Harbor as a prelude to the American Revolutionary War.

Right now Crossings Tea is only available online at crossingstea.com with a box of 20 bags selling for $7.99 and available in black, green and Jasmine.

It is Smagula’s hope that Crossings Tea will continue working with the church and government and expand by setting up its own processing and packaging units, which are more profitable than growing the tea.

This will provide employment not only to the farmers but also their families and other local people, and “the proceeds will go to build the church,” he said. In time it might expand to other areas beyond Three Gorges.

“I prayed about this,” Smagula said. “The church will have a positive role in economic development grounded in church teaching on social justice. It’s all part of the mission to evangelize.” 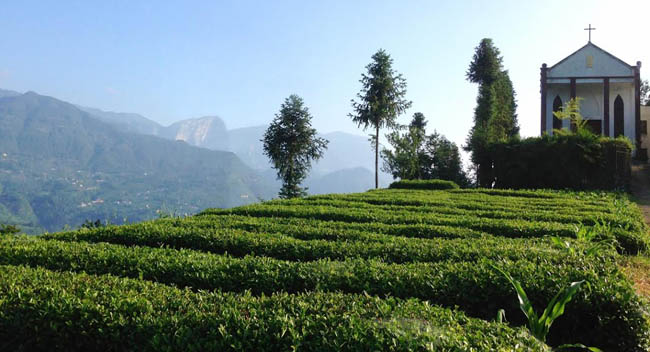 A Catholic church stands at the head of a lush plot of tea located in the Three Gorges area of Central China.

NEXT: The good life starts with commitment