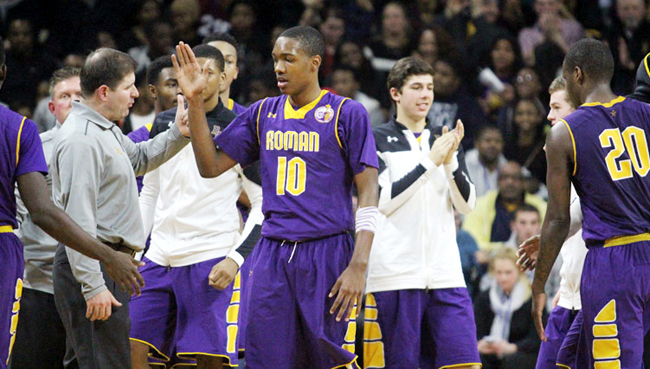 Roman Catholic standout guard Tony Carr (10) and teammates enjoy their slim lead over Neumann-Goretti during the Catholic League championship Feb. 23 at the Palestra, as Roman coach Chris McNesby (center, in gray) calls his players to the bench during a timeout. (Sarah Webb) 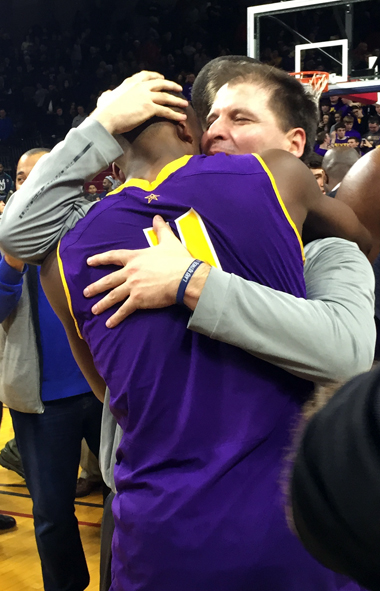 Roman Catholic junior Nazeer Bostick, who scored a game-high 23 points on 9 of 13 shooting, is overcome by emotion as he hugs coach Chris McNesby moments after their champtionship win. “Teaming up with these guys was all about winning the Catholic League championship,” Bostick said. “This is what we set out to do from the very beginning.” (John Knebels)

By now, mostly everyone knows that Roman Catholic defeated Neumann-Goretti, 64-59, in Monday night’s Catholic League championship at the hallowed, and jam-packed, Palestra.

How the Cahillites became champs warrants a recall.

Outside of a quick 4-0 deficit, the scoreboard favored Roman Catholic from the start. Leads of three became five, and then eight, and then 11, and as the halftime buzzer blared, the lead had swelled to 15. Loyal Cahillite fans, resplendent in purple and gold, were already celebrating.

Indeed, if there was ever a perfect start to a basketball game, this was it.

But in the mind of first-team All-Catholic junior Tony Carr, the contest wasn’t over. Far from it.

“They’re champions, and they have a champions’ mentality,” Carr said. “We were doing great, but in the back of my mind, I knew they would make a run. There was no way they were going down without a fight until the end. They were going to come at us with all they had, and we were going to have to find a way to overcome that.”

Carr was referring to Neumann-Goretti, which came into the game winners of six consecutive Catholic League titles. The Saints (23-2; both losses to Roman Catholic), who finished the regular season in first place with a 12-1 record, were trying to become the first school in league history to win a seventh straight championship.

The only other team that had won six was, ironically, Roman Catholic, which dominated the CL from the 1988-89 season through 1993-94. They lost in the 1995 championship to Archbishop Carroll and then defeated Carroll the following year.

Sure enough, the Saints (sophomore Quade Green 21 points; junior Zane Martin 13; senior Lamarr Kimble 11) did respond by climbing to within 50-46 after the third quarter, 54-52 with 5:33 left in the fourth, and 58-57 with 3:10 remaining in regulation. Only 13 seconds later, the Saints had a point-blank chance to tie and take the lead, but they missed the front end of a one-and-one foul shot. And 50 seconds later, they did it again.

“If there was any team that could claw its way back, this one was it,” said Neumann-Goretti coach Carl Arrigale, completely classy in defeat. “We’ve been down before and responded. But we have always made our foul shots. This might be the best foul-shooting team I’ve ever had.”

But those missed foul shots (they shot a composite 2 for 9), too many uncharacteristic turnovers and a deficiency of rebounds proved too much to prevent Roman Catholic (23-2 overall) from dethroning Neumann-Goretti and winning their first Catholic League championship since 2007.

“This is what I saw when I came to Roman,” said junior Nazeer Bostick. “Teaming up with these guys was all about winning the Catholic League championship. This is what we set out to do from the very beginning.”

In addition to netting a game-high 23 points on 9 of 13 shooting, Bostick also enveloped 13 rebounds and played tenacious defense from start to finish.

It seemed as though every time the Cahillites needed a key contribution, Bostick delivered. His reverse layup with 1:42 ultimately served as the winning basket because it gave Roman a 60-57 lead and ended a three-minute, 15-second offensive dry spell.

After the game, Bostick was emotionally overcome. He knelt to the floor as family and friends hugged him. His tears overflowed.

“It’s special,” he said. “We did it. We were poised. We stayed poised. That’s why we won. They had won six in a row. We didn’t want it to be seven. We wanted to start our own streak.”

Roman coach Chris McNesby could hardly finish a sentence before being besieged by a steady stream of congratulatory embraces. A 1995 Roman graduate who played on two championship teams and another that lost in the league final, McNesby said Roman became a bit passive in the second half and that allowed Neumann-Goretti back in the game.

“But we made the plays we needed to make,” McNesby said. “I can’t tell you how proud I am of what we have accomplished.”

Carr, one of the league’s MVP candidates, spoke glowingly of both his teammates and their foes.

“Neumann-Goretti … they are a champion for a reason. A few days before the game, someone asked me if I thought we were the best team, and I said, ‘No. They’re the best team until somebody else finds a way to beat them.’

On that, the defense rests.

PREVIOUS: In Catholic League semis, getting a big lead is a time to worry

NEXT: Top-rated Saints avoid a shocker to win girls’ title