Walk the way of the cross with Pope Francis 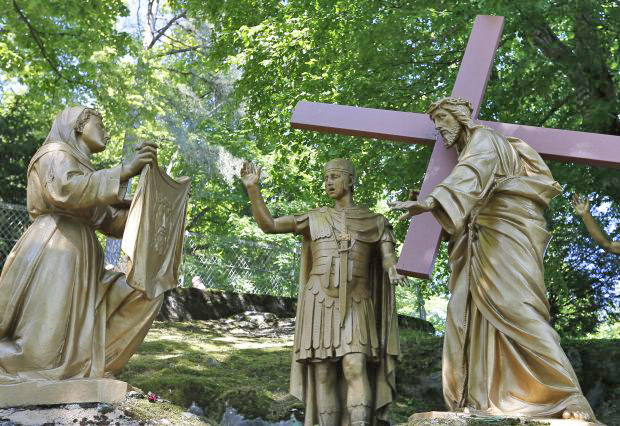 In this May 17, 2014, photo, Veronica wipes the face of Jesus in this representation of the sixth Station of Cross at the Shrine of Our Lady of Lourdes in southwestern France. (CNS photo/Paul Haring)

VATICAN CITY (CNS) — Pope Francis shows people that only by walking the Way of the Cross can they discover the “Way of the Light” — the glory of God resurrected and the salvation of mankind, said the Jesuit editor of a new book.

To help people reflect more deeply on the message of Pope Francis, Jesuit Father Antonio Spadaro created a collection of “Way of the Cross” prayers and meditations culled from homilies and reflections written by Pope Francis before and after he was elected pope.

“The Logic of Love,” available only in Italian, was published in late March. They are not the meditations that will accompany the pope’s Way of the Cross service April 3 at the Colosseum.

(See CatholicPhilly.com’s own Stations of the Cross devotion, and other Lenten resources in our Lent 2015 section.)

Here are some excerpted passages from the meditations:

“Sometimes it may seem as though God does not respond to evil, that he is silent. In reality, God has spoken, he has replied and his answer is the cross of Christ: a word that is love, mercy and forgiveness. It is also judgment: God judges us by loving us. If I embrace his love then I am saved; if I refuse it, then I am condemned, not by him, but by myself, because God does not condemn, he only loves and saves.”

“When you ‘take up the cross,’ you find your proper place in life. When we take on the needs of our brothers and sisters, then we are aware, with amazement and gratitude, that someone else is taking us upon his shoulders. … When the suffering of our brothers and sisters touches us and hurts us, when the feeling of impotence grows deeper and makes us suffer, that is when we find our true way toward Easter.”

“One of the most serious temptations that keep us from the Lord is a defeatist attitude. … No one can launch a battle if they do not first have complete confidence in winning. Whoever engages in battle without confidence is halfway to losing even before beginning. Christian triumph is always a cross, but a cross that is a victorious banner.”

“Let us learn to look at each other under the maternal gaze of Mary. There are people who we instinctively consider to be beneath us and yet are the most in need: the most abandoned, the sick, those who lack the means to live, children on the street, those who do not know Jesus, those who don’t know the tenderness of Mary.”

Fifth station: Jesus is helped by Simon of Cyrene to carry his cross.

“Only those who recognize their own vulnerability are capable of acts of solidarity. In fact, to be moved by and have pity on those lying along the roadside are attitudes of people who know how to recognize their own image in others — a mixture of dirt and treasure — and so do not reject them. On the contrary, they love them; they draw near and, unwittingly, discover that the wounds they heal in their brothers and sisters are a salve for their own wounds.”

“Today more than ever you can discover in people’s pleas a search for the Absolute, which at times takes the form of a cry of pain of an affronted humanity. ‘We would like to see Jesus.’ How many times with a silence more eloquent than a thousand words, they ask us this. We know them well: they are among us. Faces of children, young people and adults. There is no lack of faces marked with pain and discouragement.”

“There are no difficulties, trials or misunderstandings that can frighten us provided we remain united to God as branches to the vine, provided we do not lose our friendship with him, provided we always make more room for him in our lives.”

“The best prayer that can be made on this earth is the tears of a mother or a father who cries for their children: the prayer of silent and gentle tears that is like Our Lady’s prayer at the foot of the cross, showing she knows how to be near her Son without screaming and outrage, but only accompanying, interceding.”

“You can give the Lord your weariness and struggles, as well as those of the people the Lord put along your path. You can let the Lord embrace your fragility, your dirt, in order to transform it into an evangelizing force and source of strength.”

Tenth station: Jesus is stripped of his garments.

“The smallness of the Kingdom requires being stripped, which will proceed revealing itself in the various stages of our life. … Jesus reminds Peter that he will have to follow him in being stripped: ‘When you were younger, you used to dress yourself and go where you wanted; but when you grow old, you will stretch out your hands, and someone else will dress you and lead you where you do not want to go.'”

Eleventh station: Jesus is nailed to the cross.

“It is on the cross that Jesus definitively takes on failure and evil, and he transcends them. There his love is shown to be boundless because only those who love much possess the freedom and vitality of Spirit to accept failure. … When everything is lost, when no one is left, that’s when God intervenes.”

“On the cross one needs to lose everything in order to win everything. That is the place where you sell it all to buy the precious pearl or the field with the hidden treasure. To lose it all: ‘Whoever loses his life for my sake, will find it.’ No one forces us, it’s an invitation. An invitation to ‘all or nothing.'”

Thirteenth station: Jesus is taken down from the cross.

“We know that Mary, after the cross, took Jesus’ body. It is a sad and sacred moment; recalling it gives us hope because it is the great affection of our beloved Mother. … May she help us take care of every life and the whole of life — life that begins, life that unfolds and life that ends.”

Fourteenth station: Jesus is laid in the tomb.

PREVIOUS: Praying Lent: Friday of the Fourth Week of Lent

NEXT: Praying Lent: Saturday of the Fourth Week of Lent