When Sister knocks, doors open, and she listens 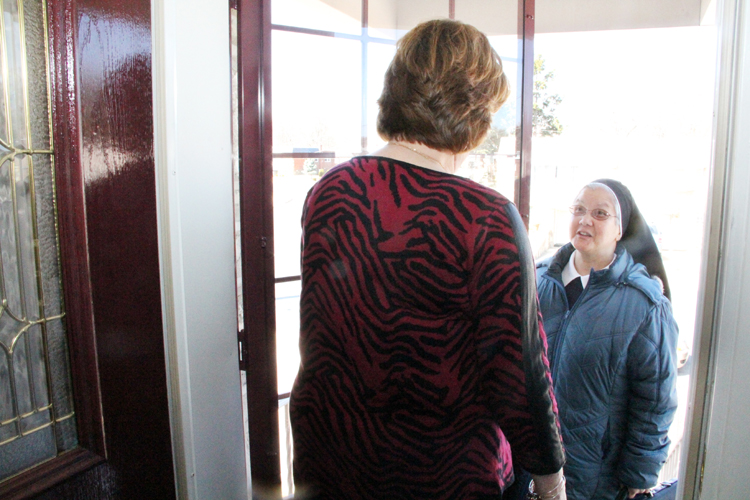 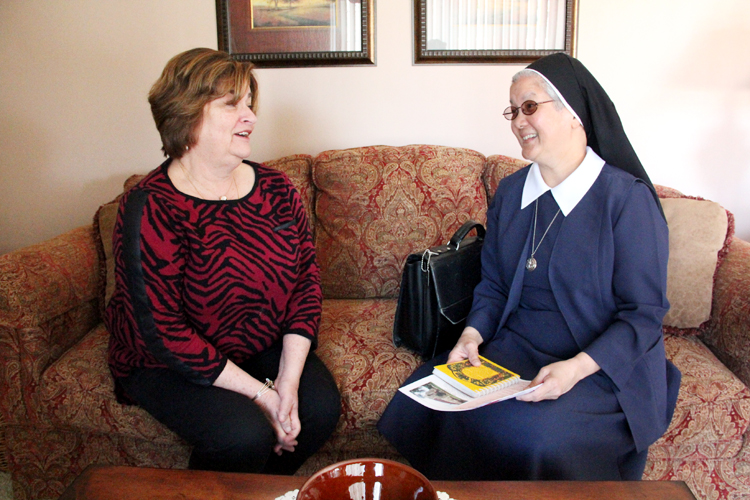 If St. Katherine of Siena Parish in the Torresdale section of Philadelphia experiences an uptick in its RCIA and PREP programs this coming year as well a spate of marriage blessings and more communion calls, it can thank Sister Mary Praxedes.

The sister with the Monroe, N.Y.-based Parish Visitors of Mary Immaculate has been doing house-to-house visitation since November and will wind up in mid-April.

Sister Mary Praxedes doesn’t just visit homes of registered parishioners; she knocks on every door or rings every bell. When she comes, depending on the need, it might just be for a few minutes. But just as likely she will sit down and chat for an hour or more; actually more listening than chatting. She’s got that chemistry — people unburden their worries and their needs to her.

That’s perfectly in keeping with the charism of her congregation from its foundation by Mother Mary Teresa Tallon in 1920. Mother Mary Teresa (1867-1954) entered the Holy Cross Sisters at age 19 but after 33 years, with permission, she left to found the Parish Visitors. The order uniquely combines the contemplative life with missionary work through parish visitation and a special focus of bringing lapsed Catholics back to the faith. 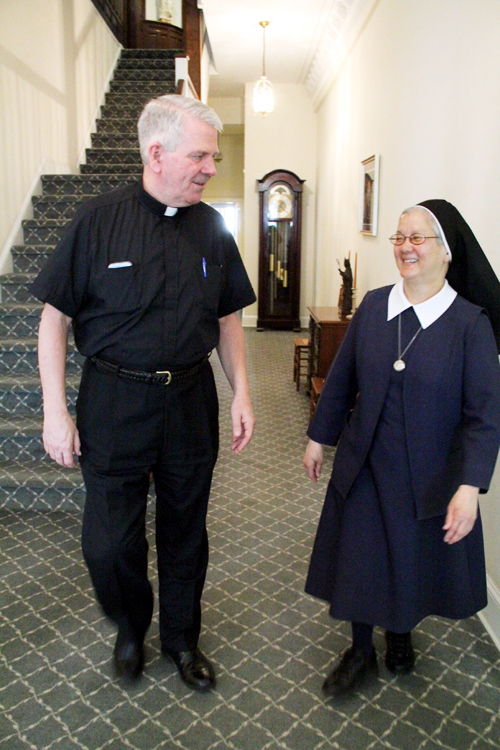 Sister Mary Praxedes came to the U.S. from the Philippines. “I was working as a nurse for 11 years before entering,” she said. “While I was discerning I was attracted to the Parish Visitors, especially because of the contemplative and missionary characteristic of the community.

“I entered in 1986 and I was only in my postulancy for a few weeks when five of us as a group went out on visitation.”

But they did not go together; each postulant went to a different street. Although St. Luke tells us Jesus sent his disciples out two by two, it was Mother Mary Teresa’s decision that her sisters would go one by one.

“Our work has a lot of confidentiality in it,” Sister Mary Praxedes said. “It is like going to confession. You can’t really divulge it to anybody except the pastor who has to know everything.

“I just listen. There are so many things people will share with me; their problems, their spiritual problems and all of that.”

Her work is made easier because Father Paul Kennedy, St. Katherine’s pastor, has the general area she will be visiting printed in the weekly parish bulletin. 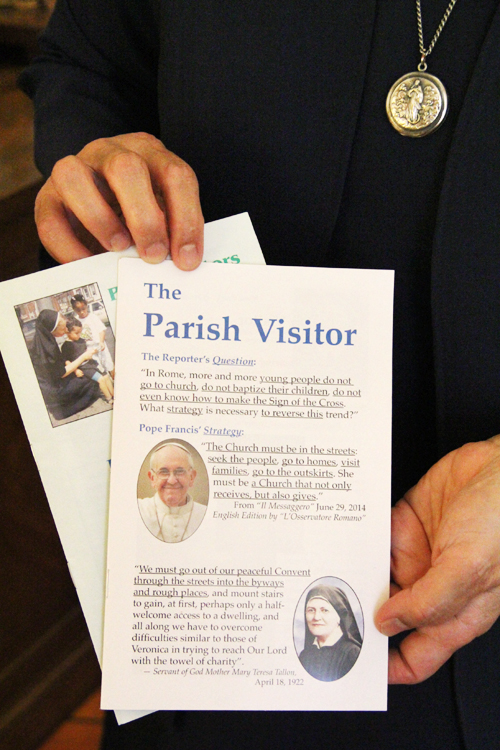 An example of some of the explanatory literature Sister Mary Praxedes brings along on her home visits. (Sarah Webb)

In the early days of the congregation, the emphasis was on parish visitation, mostly gathering Catholic census data as used to be done during what we in Philadelphia called the block collection. Now in many places, including the St. Katherine visit, the order makes the evangelical aspect prominent.

Susan Camp, who was recently visited by Sister Praxedes, is an active parishioner at St. Katherine but nevertheless appreciated the house call.

“I knew she was going to visit, but I didn’t know when and I was fine with it,” Camp said. “I think it is nice that Sister came; it might bring some people back to the Church.” 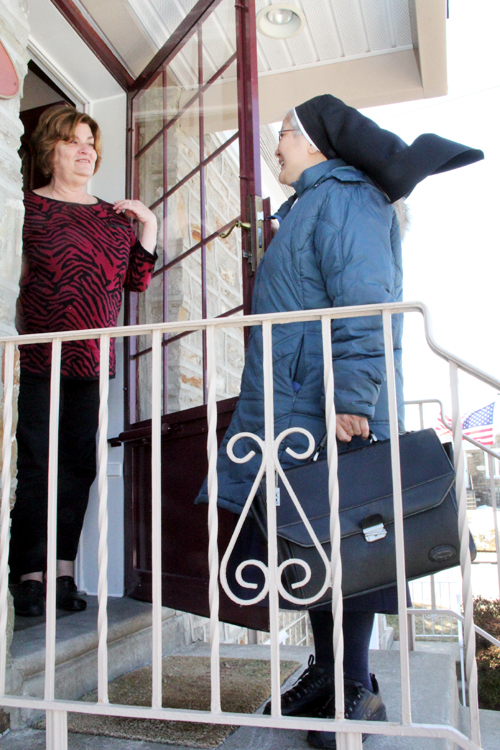 He first became aware of the work of the sisters through literature sent to the parish, and emailed Mother Carole Marie, the congregation’s superior, to request a parish visitor for St. Katherine.

The parish happens to be one of the largest in the city, with more than 2,000 attending Mass every weekend and has a thriving school. Why did Father Kennedy feel it needed an evangelization program? His answer is, while the parish is certainly in good shape, he intends to keep it that way.

Initially Mother Carole Marie told Father Kennedy that there were no sisters to spare at that time but she would keep him in mind. True to her word, Mother Carole Marie called last October to inquire if he still was interested in have a Parish Visitor. Yes, he was.

After further conversation a visit was arranged for Mother Carole Marie and Sister Mary Praxedes. Father Kennedy showed them around the parish and introduced them to the Sisters of the Holy Family of Nazareth at the parish convent who were more them willing to invite Sister Mary Praxedes to be a guest in their convent during her stay.

“So far she has given us 15 prospects for RCIA and a list of people in invalid marriages to be blessed,” Father Kennedy said.

The ministry of the Parish Visitors is clearly effective and very much in demand. The problem is, the congregation is tiny, and its roughly 70 members can’t possibly fill the need. For this reason Mother Carole Marie and one of her sisters visited Philadelphia a couple of years ago to teach their techniques to parish representatives.

Perhaps no one is more aware of the effectiveness of the Parish Visitors of Mary Immaculate than Meghan Cokeley, the director of the archdiocesan Office for the New Evangelization.

Her own life was indirectly influenced by their work. Many years ago her own mother had fallen away from the practice of the faith and attributed her return to a visit by a Parish Visitor of Mary Immaculate.

At this time the cause for the beatification and canonization for Mother Mary Teresa Tallon has been endorsed by the United States Conference of Catholic Bishops and is being actively pursued by the Archdiocese of New York. In January of this year more than 24,000 pages of documentation for the cause were sent to the Vatican as part of the ongoing process.

NEXT: On Romero Day, leaders get to know the poor