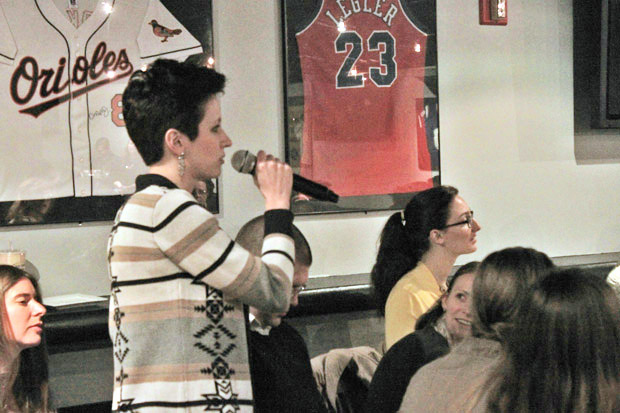 A young woman asks the priest panelists a question at "Stump the Priest" March 25 at the Field House in Philadelphia. 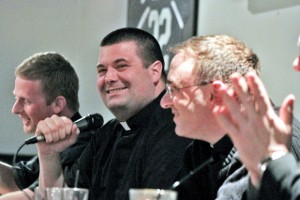 Father Tom Whittingham (center, with microphone) has fun answering questions along with other priests, from left, Fathers David Friel and Sean Bransfield. Also on the panel was Father Joseph Bongard.

Father Tom Whittingham came across an idea called “Stump the Priest” in which young adults ask questions pertaining to the Catholic Church, especially hot-button issues on church teachings and how to evangelize fallen away Catholics and anyone.

With the help of some brother priests and Meghan Cokeley, director of the archdiocesan Office for the New Evangelization, Stump the Priest was held Wednesday night, March 25, at the Field House, a bar in center city Philadelphia.

The inaugural event drew about 100 young Catholics from various young adult groups throughout the Archdiocese of Philadelphia. Questions were submitted by email and in person before the start of the event.

One question that almost stumped the priests was the appropriate age to receive the sacrament of confirmation.

“High school is best for Catholics to be confirmed,” said Father Bongard.

Father Whittingham pointed out that many people consider confirmation to be a kind of graduation, a one-time event, yet “people should be engaged with their faith beyond receiving the Holy Spirit,” he said.

As the evening got more interesting, the priests tackled an inquiry regarding married priests.

“That will not change,” said Father Bransfield. “We cannot be celibate to both the church and our spouse. It will not solve the vocation crisis, though other churches allow this practice.”

When it comes to dating, Father Whittingham directed the young adults in attendance and others following live on Twitter to a blog from the website “Chastity Project.” http://chastityproject.com/blog/ It is not easy for people to be chaste in a demanding society, but Father Bransfield said, “The church understands how hard it is. In order to live in holiness we must live in Christ.”

A discussion among the group arose about the decline in vocations to the priesthood and religious life. Some cited as a cause the rise of secularism in the western hemisphere, particularly in the United States. Others pointed to the breakdown of the family structure as contributing to the fall of religious life as well.

The good news, as Father Friel put it, is that “no vocation is greater than the other. It is a gift from God,” he said.

Father Friel also suggested a remedy to the weakening of faith in Jesus.

“We need a revitalization to raise children to be saints,” the priest said. “Help others to lead them to Jesus.”

“We must grow in Christ,” Father Whittingham added. “My relationship with Christ grows me.”

Father Bransfield added that Catholics “are called to be more cultural.” In a sense Catholics must be willing to be “cultural Catholics” by living their faith in the secular society, the priest explained.

Reflecting on the event, Father Whittingham said it was inspiring to help tackle the questions that matter most to Catholics. There was no topic that he and the other priests declined to answer.

“I believe there is great wisdom in the church and her teachings and I’m not afraid or ashamed of any of them,” he said. “I want everyone to know the truth and to have a chance to ask any and all questions!”

Alice Cieslak of SS. Philip and James Parish in Exton said she was blessed to be a part of the faith-filled event. She is currently a member of Catholic Young Adults of Chester County (CYACC).

“I enjoyed the Stump the Priest event because it was an opportunity to interact and listen to a panel of priests discuss topics that concern young people today,” she said. What struck her the most was, “hearing that once you encounter God, it will change the way you live your life.”

Cieslak sees a great need for “people truly passionate about living out their faith in their daily lives,” she said.

She got a glimpse of some of those people at the Stump the Priest discussion. 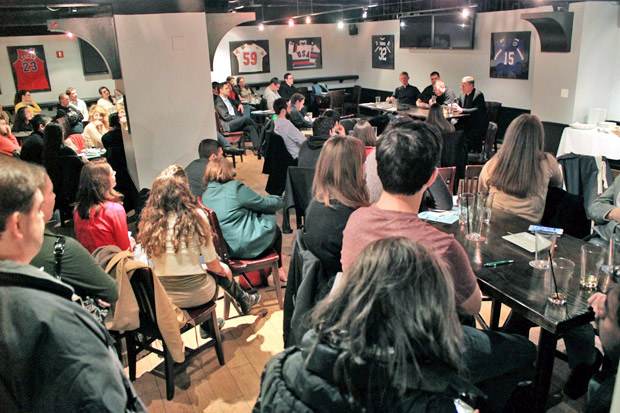