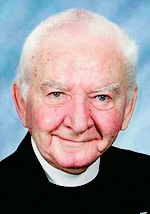 He was ordained May 8, 1954 at the Cathedral Basilica of SS. Peter and Paul by Archbishop John F. O’Hara, and his first assignment was as a parochial vicar at Immaculate Conception Parish, Marcus Hook.

“I was 8 years old and an altar server” at the parish, remembers Msgr. Ralph Chieffo. “He would pat me on the head and tell me I should be a priest. He was always generous, very kind and the people loved him.”

It developed into a life-long friendship, Msgr. Chieffo said. “When I became a priest he helped me persevere; he always told a joke but he knew who he was and as a priest he challenged us. Every day he had a holy hour, but it would be followed by a happy hour; his wish was that priests should be happy.”

He also served as chaplain at the State Correctional Institution at Graterford and chaplain for the Catholic Daughters of America.

He also volunteered to take over as administrator of Holy Trinity in Pottstown when that parish was scheduled for closing.

Msgr. Galyo arrived at Sacred Heart right after his stint in prison ministry. In his introductory remarks at the parish he told the people, “I just escaped from jail,” and they knew the new pastor had sense of humor, according to parishioner Mike Paster, who became a close friend.

“He was gregarious and greatly loved by the people, he was a true shepherd and compassionate man who often did without himself so that the parish and the church could flourish,” Paster said. “He would donate funds to people who needed them out of his own pocket, and he kept the parish open in difficult times.”

Msgr. Galyo is survived by his sister, Mary Gallagher and many nieces and nephews.

NEXT: Immaculate Heart sister who taught in all grade levels dies at 74