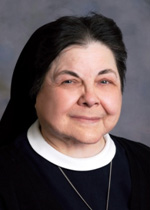 Sister Jane Anne Molinaro, I.H.M.,  died Jan. 6 in Camilla Hall, Immaculata, in the 56th year of her religious life. She was 74 years old.

Born in Norristown, Sister Jane Anne entered the Congregation of the Sisters, Servants of the Immaculate Heart of Mary in 1958 from Holy Saviour Parish in Norristown, and professed her vows in 1961.

She taught in elementary and secondary schools in the Archdiocese of Philadelphia and the Diocese of Harrisburg. She was assigned to Immaculata University in 1979 and taught undergraduate and graduate students in the biology and research departments. She was also very active in extracurricular activities at the university.

Sister Jane Anne is survived by members of her religious community, by her sisters-in-law Grace (Lawrence), Charlotte (Nicholas), Betty (Damian), many loving nieces and nephews.

She was predeceased by her parents, Giacomo and Angelina Salvatore Molinaro, her brothers Lawrence, Nicholas, Joseph, Cosmas, Damian, and her sister-in-law Antoinette.