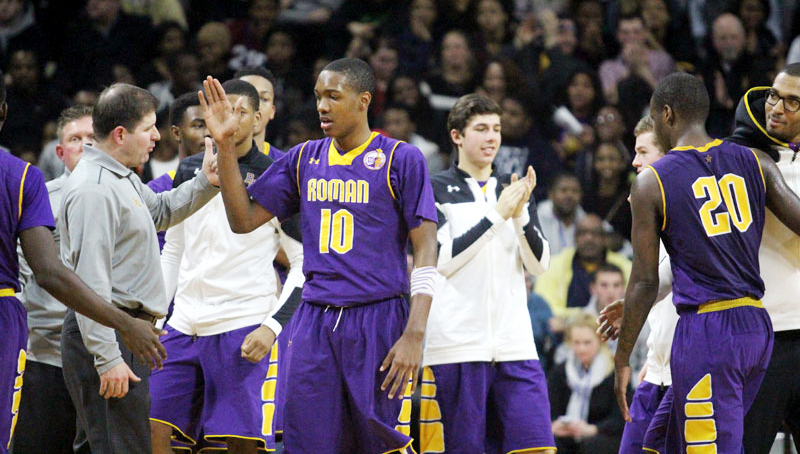 Roman Catholic standout guard Tony Carr (10) and teammates take a timeout during the Catholic League championship Feb. 23 at the Palestra, as Roman coach Chris McNesby (center, in gray) calls his players to the bench. (Sarah Webb)

In a best-case scenario, figured Roman Catholic senior TreVaughn Wilkerson, he would go to center court and, even though he wouldn’t be able to play because of a knee injury that wiped out his season since early December, receive a first-place medal for being a member of the state champions.

Wilkerson figured wrong. There would be something even better.

Up by 17 points with 28 seconds remaining in the game, Roman coach Chris McNesby looked down the bench and summoned a guy who would have been a mainstay had it not been for the aforementioned knee injury.

With his teammates applauding, Wilkerson limped to the scorer’s table and then cautiously walked onto the court. About 12 seconds later, his night was done.

Those unforeseen 12 seconds sort of symbolized Roman Catholic’s season, because anything that could have gone right, did indeed.

The Cahillites’ 62-45 victory over Martin Luther King in Saturday night’s PIAA Class AAAA state title match at the Giant Center in Hershey, Pa., came on the heels of having defeated six-time defending champ Neumann-Goretti for the Catholic League title a few weeks earlier. Roman finished a superb 29-2 behind a cast of characters that triumphed every way possible during their five-game state title journey.

“It’s a great group of guys,” said McNesby, a 1995 Roman grad. “They’ve accomplished so much and I couldn’t be more proud to be associated with them.”

“Except for maybe going undefeated, this was a perfect season,” said junior guard Nazeer Bostick, the star of the Catholic League championship win who, against King, matched senior center Manny Taylor with seven rebounds. “There wasn’t any situation that we felt we couldn’t handle.”

Roman was one of three Catholic League teams to secure a state title last weekend.

Another was Neumann-Goretti, which garnered gold for the fifth time in the last six years, the only blip occurring in 2013. In the AAA final, the Saints struggled at times against CL mainstay Archbishop Carroll but never lost their confidence.

“Games like this often come down to free throws,” said N-G junior swingman Zane Martin. “You’re tired but you have to find the strength to make those shots.”

Largely because Martin made eight of his nine tries, en route to a stirring 26 points, the Saints were able to get rid of the bad taste of having lost to Roman Catholic in the Catholic League final.

“That won’t ever go away completely,” said N-G senior Lamarr Kimble, who in his last game before moving on to St. Joseph’s University scored 10 points. “But it’s definitely nice to finish your career with a win as big as this.”

Carroll senior Derrick Jones was a monster. He scored 30 points, seized 18 rebounds, blocked six shots and drove the Saints crazy underneath. Unfortunately, what he wants to forget is missing 11 of his 15 free throws.

In defeat, Carroll junior Ryan Daly was classy. A consistently gritty player whose 14 rebounds, nine points, defensive prowess and constant hustle might have gone unnoticed by many, Daly said he will remember the positives more than the negatives.

“It was a great experience,” Daly said. “I was a little nervous early but that went away. It was a good game and I wish we had found a way to win.”

Conwell-Egan, supported by an amazing seven school buses that made the trip, was able to find a way to win. In the Class AA final on Friday, the junior trio of LaPri McCray-Pace, Stevie Jordan, and Vinny Dalessandro – all starters since their freshman year – led the Eagles past formerly undefeated Alquippa, 62-51.

With McCray-Pace supplying 22 points, nine boards and four assists, Jordan scoring 21 points, and senior guard Chase Kumor adding 14 more, the Eagles emerged from Hershey as champs and finished their season with a 21-8 record.

“The support was unbelievable,” said Jordan. “That meant so much to all of us. We have had great fans all season long, and we were so happy to win this game for them.”

In the girls’ AAA final, Archbishop Wood fell to Blackhawk, 46-40. Free throw woes significantly hurt the Vikings, their 4 for 12 shooting creating the difference since two-time champ Blackhawk, which defeated Wood in the final last year as well, shot 17 for 17.

ankle that prevented her from playing in the semifinals, senior Aubree Brown scored 16 points (all in the first half) and added eight rebounds, three assists and three blocks.

“The (second-place medal) is nice but I really don’t want it,” Brown said. “We came here to win, and while finishing second is nothing to be ashamed of, it was the first-place medal that I wanted to be wearing.”

As reported last week on CatholicPhilly.com, Neumann-Goretti’s girls finished a perfect season with a 30-0 record after dismantling Seton-LaSalle, 79-34, in the Class AA final. Ciani Cryor’s 15 assists and 11 points, A.J. Timbers’ 20 points, Sianni Martin’s points and Christina Aborowa’s 13 points and 11 rebounds were way too much for Seton.

“After we lost (in the state final last year), the only thing we wanted was to come back here and do this,” Cryor said. “I can’t tell you now good this feels.”

A quick look at some predictions made last week by yours truly: Got the Roman Catholic pick right … nailed the Conwell-Egan selection despite the Eagles playing an undefeated team … was unable to see Neumann-Goretti finding a way to yet another title, and predicted with heart over head when getting the Wood pick wrong.